The Old Quarters of Hanoi, with all the backpacker hostels congregated along the claustrophobic streets, held our baggage, but it was the area to its west which captured our attention. Leaving the quarters, the cab steered from the narrow streets into wider boulevards, revealing the iconic cubic architecture of Ho Chi Minh's Mausoleum. We had arrived in Ba Đình area, where most of Hanoi's famous attractions and must-sees were located.

The area is unavoidable to most travelers as within it held a few locales which resonated with most visitors, local and foreign alike. One of those which reflected the long history of Vietnam as well as representing a structure as true to its medieval architecture as possible, would be the One Pillar Pagoda, locally known as Chùa Một Cột, but historically called Diên Hựu tự (延祐寺) or Liên Hoa Đài (蓮花臺). And in an area where nearly every entrance demanded a fee, this was one of those which required none.


The pagoda's namesake was easily sighted after crossing a small courtyard and rounding a small temple after the entrance. Standing in the middle of a pond, accessible only through a flight of stone stairs, the pagoda was a modern rebuild of an ancient architecture. The original pagoda, we learnt sadly, was destroyed by the retreating French colonials during the First Indochina War in 1954. What visitors would witnessed though would be the undying Vietnamese spirit, surviving wars in the past century and rebuilding those which did not. 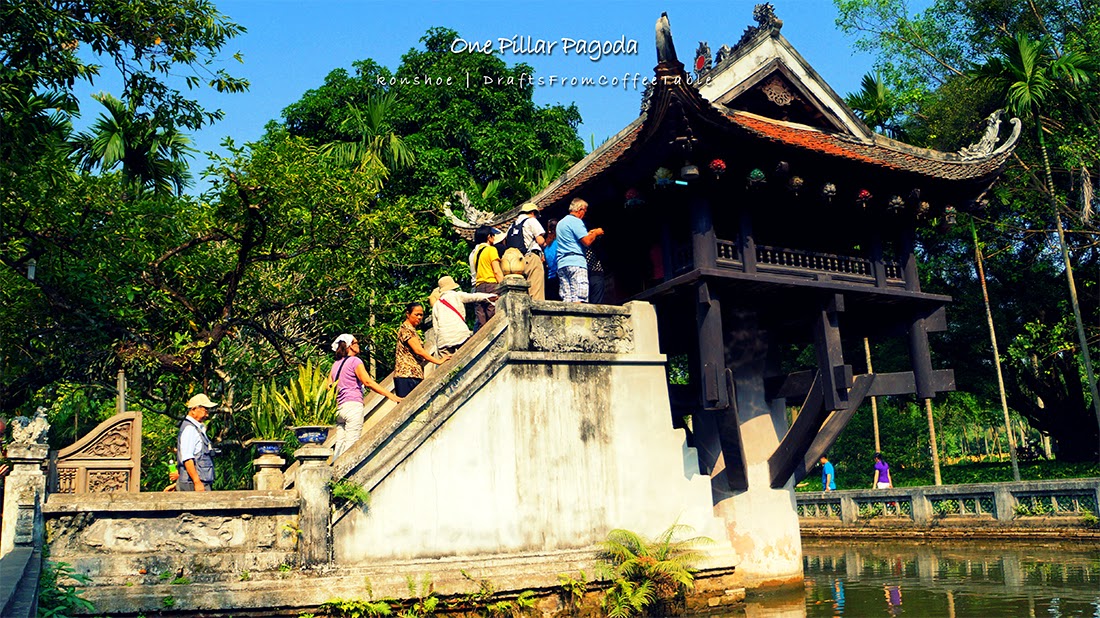 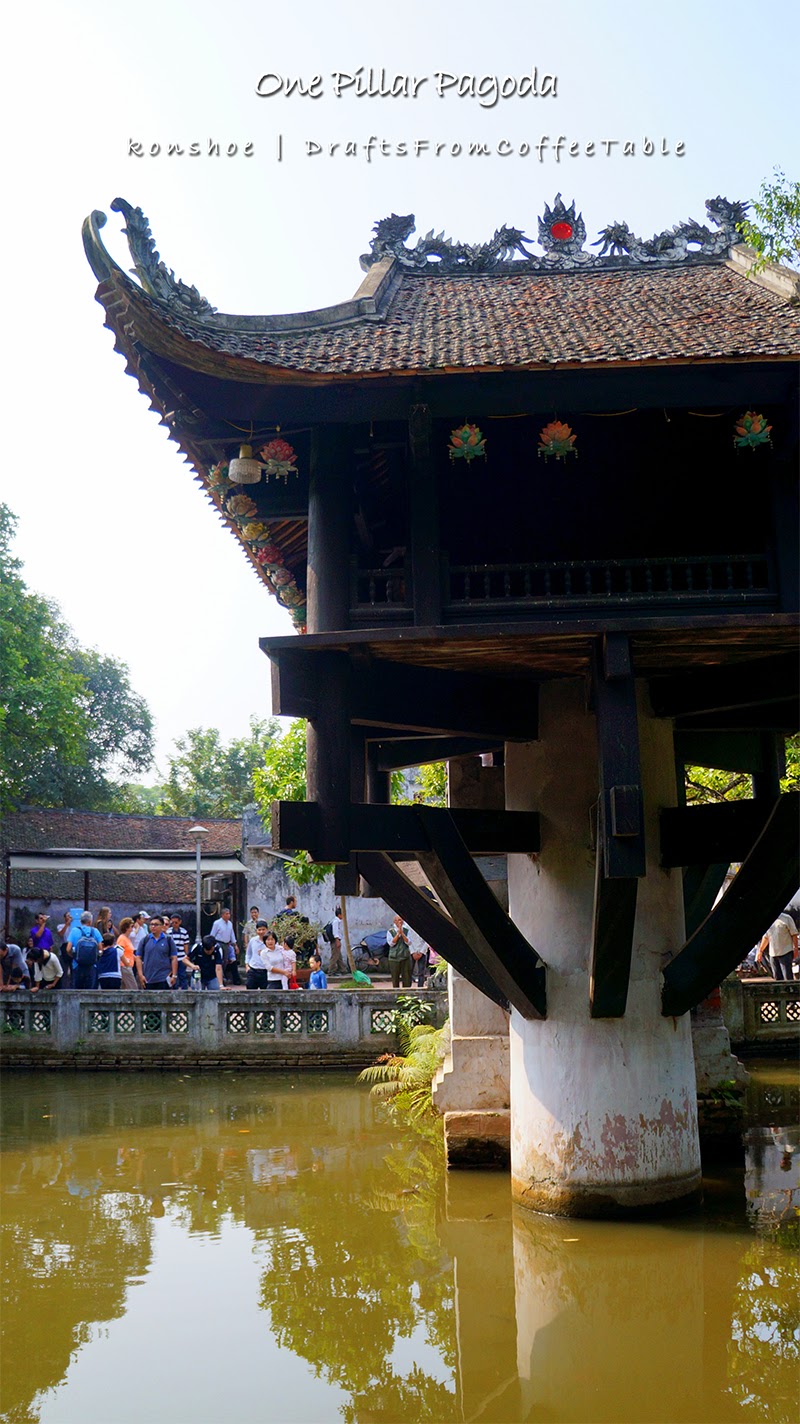 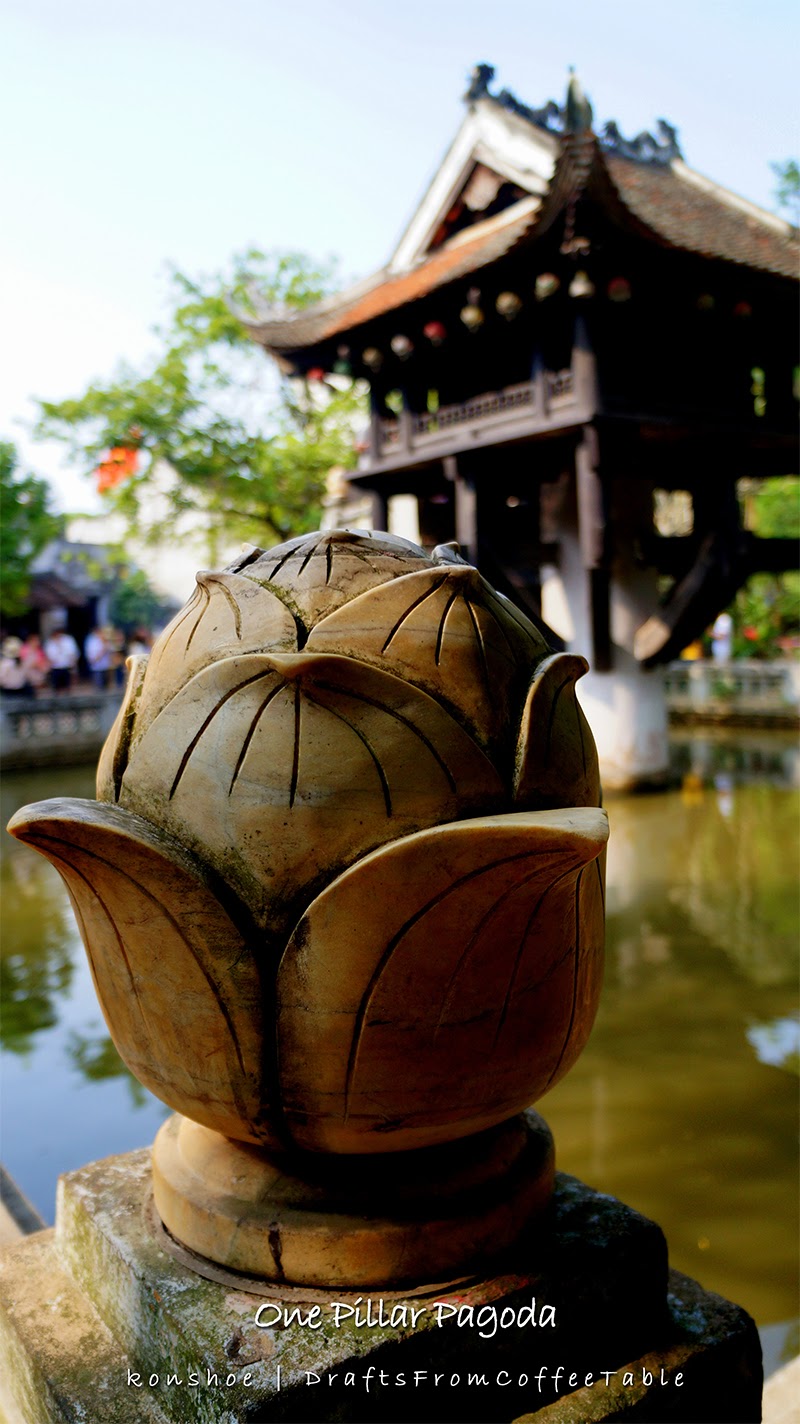 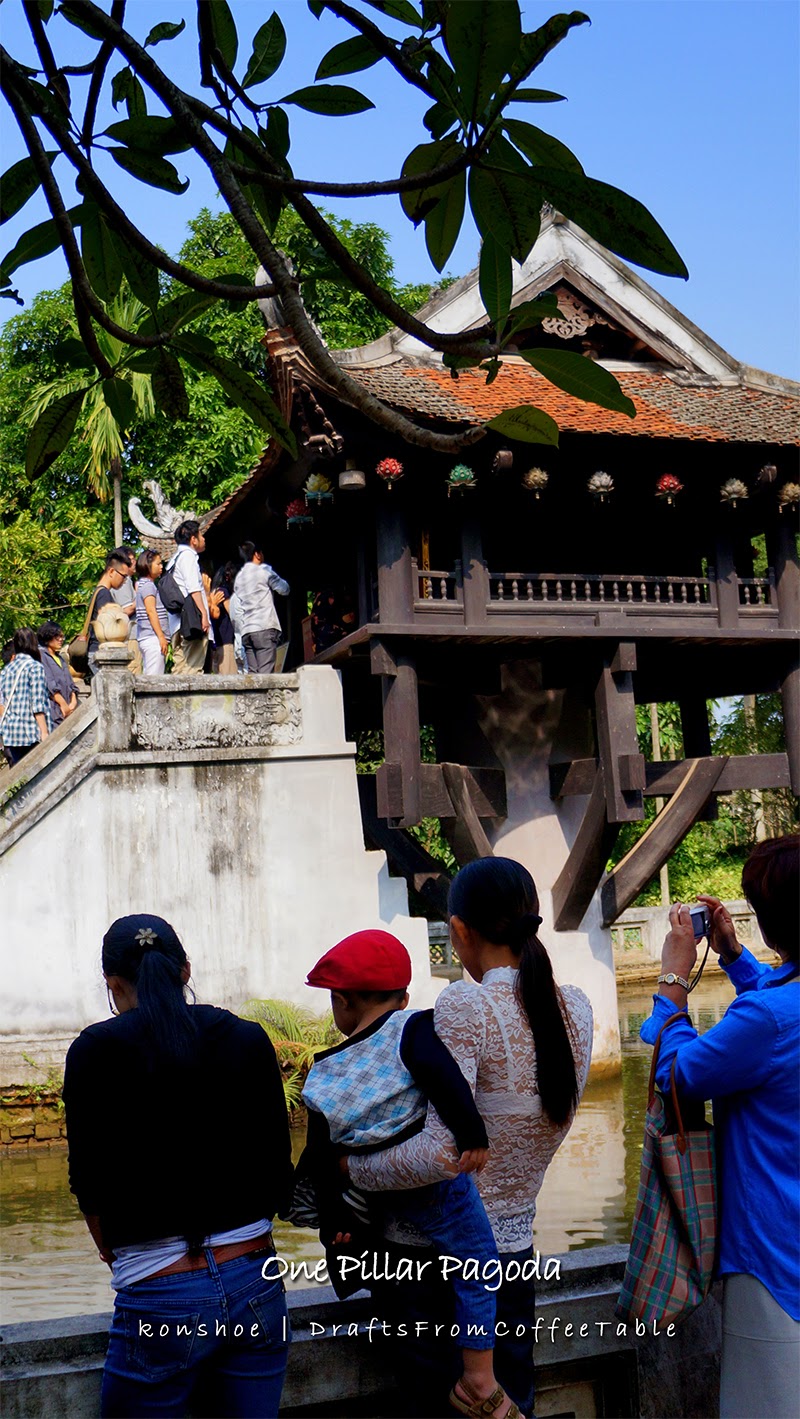 The thick pillar rose out of the pond and ended with multiple branches of support below the pagoda, recreating a geometry reminiscent of a lotus bloom. We did not arrive in the right season to view the pond in its full splendor, for we only witnessed murky waters bereft of any color apart from the color of mud. In my research online, the lotus pond would be covered by greens punctuated by pinks of lotus flower, an enrapturing sight to most visitors. The pagoda would then blend perfectly well with the pond, a giant artificial lotus in a pond full of originals.


One Pillar Pagoda may got its current name through the obvious outlook, but its historical name bore a better reflection of its true purpose and reason of existence. The construction of the pagoda occurred under the reign of Emperor Lý Thái Tông, who ruled in 1028 to 1054, making this building one of the most historical, aged nearly a millennium if it survived. Legend has it that the childless emperor dreamed of Bodhisattva Avalokitesvara handing him a baby boy while sitting atop of a lotus flower as was usually depicted of her. After that dream, the emperor married a peasant girl whom he met and a child was born to him.

A monk by the name of Thiền Tuệ advised him to construct this pagoda to show his gratitude to the goddess of mercy, which he did in 1049. To further reflect his gratitude, the pagoda was built with only an erect pillar holding it above a lotus pond, with the multiple branches evoking an image of a blooming lotus flower, atop of which sat the pagoda housing a statue of Bodhisattva Avalokitesvara just as he witnessed in his prophetical dream. 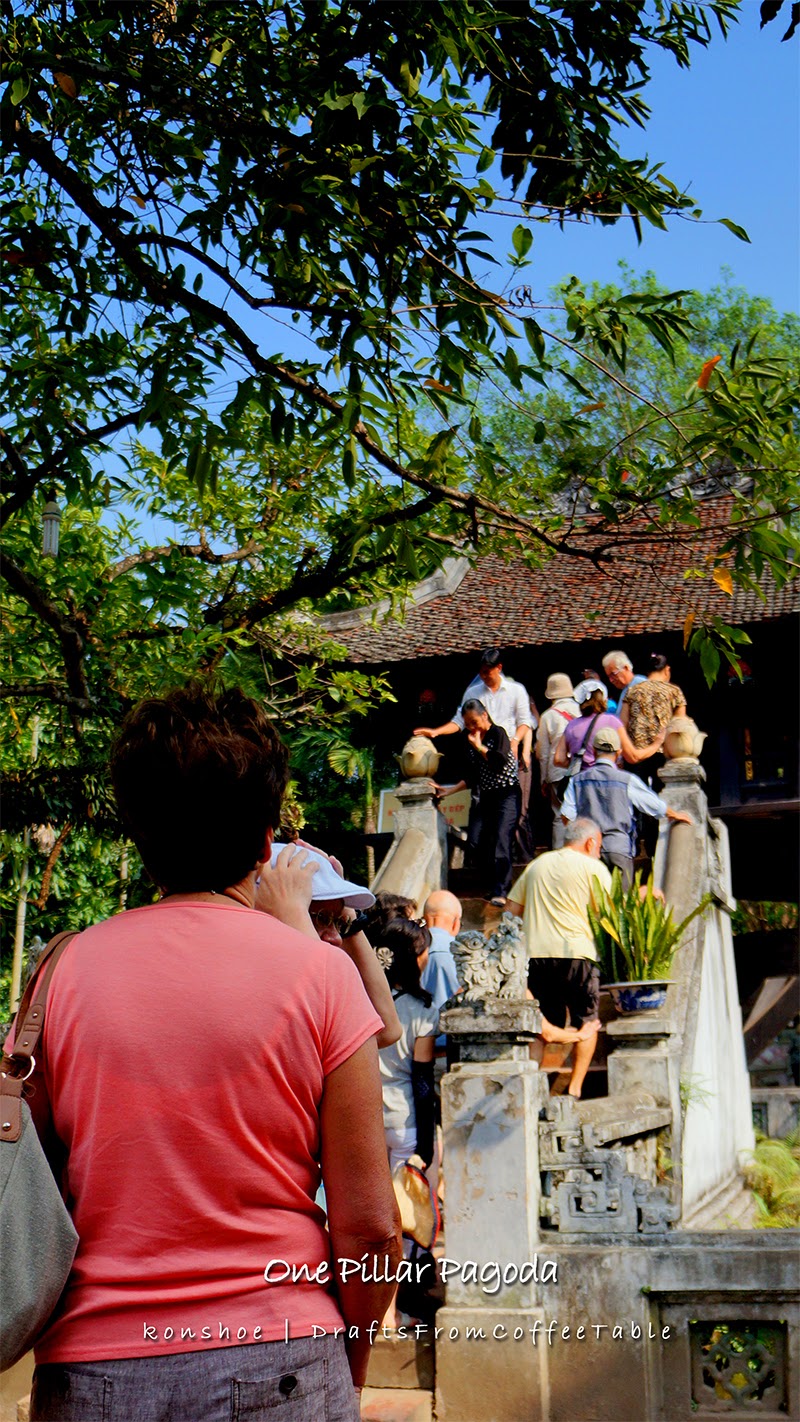 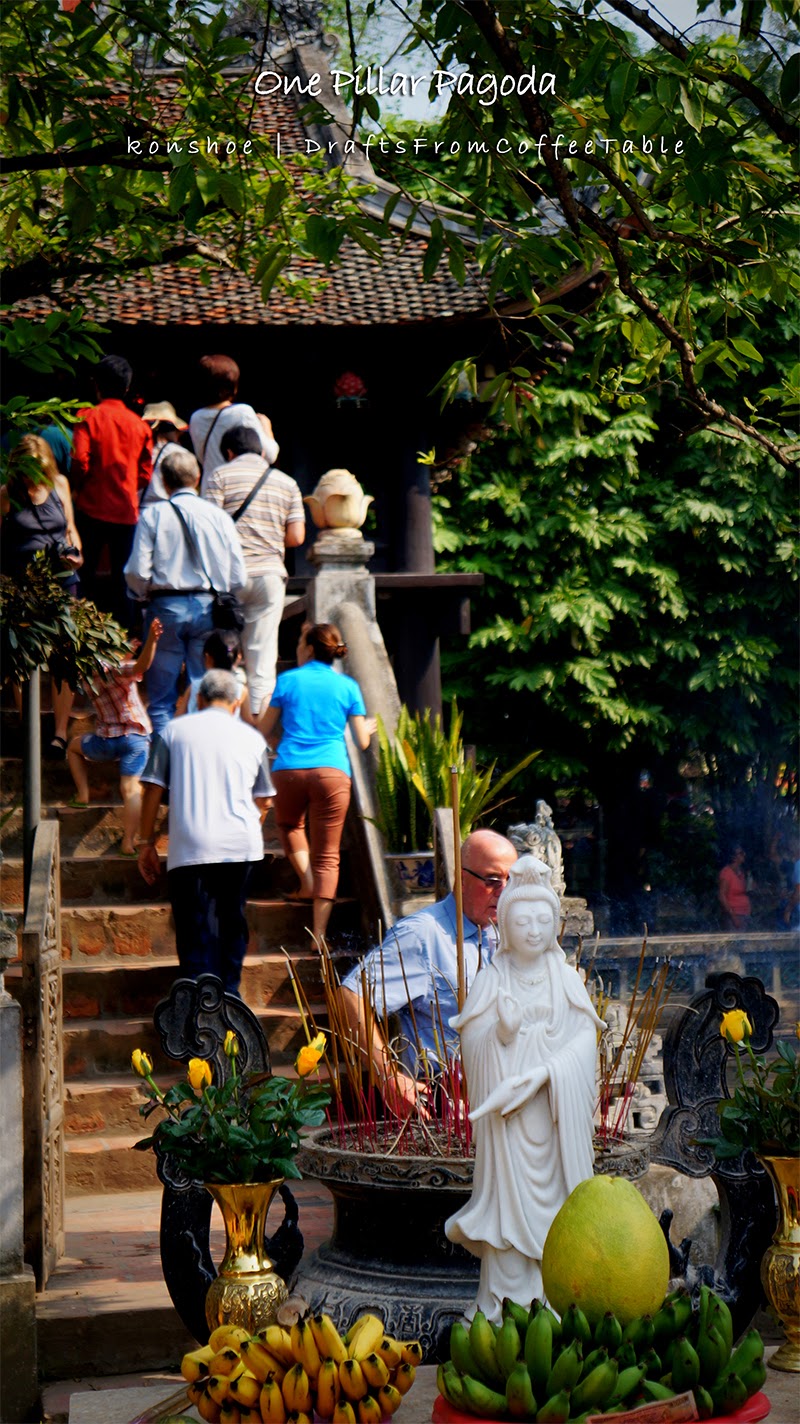 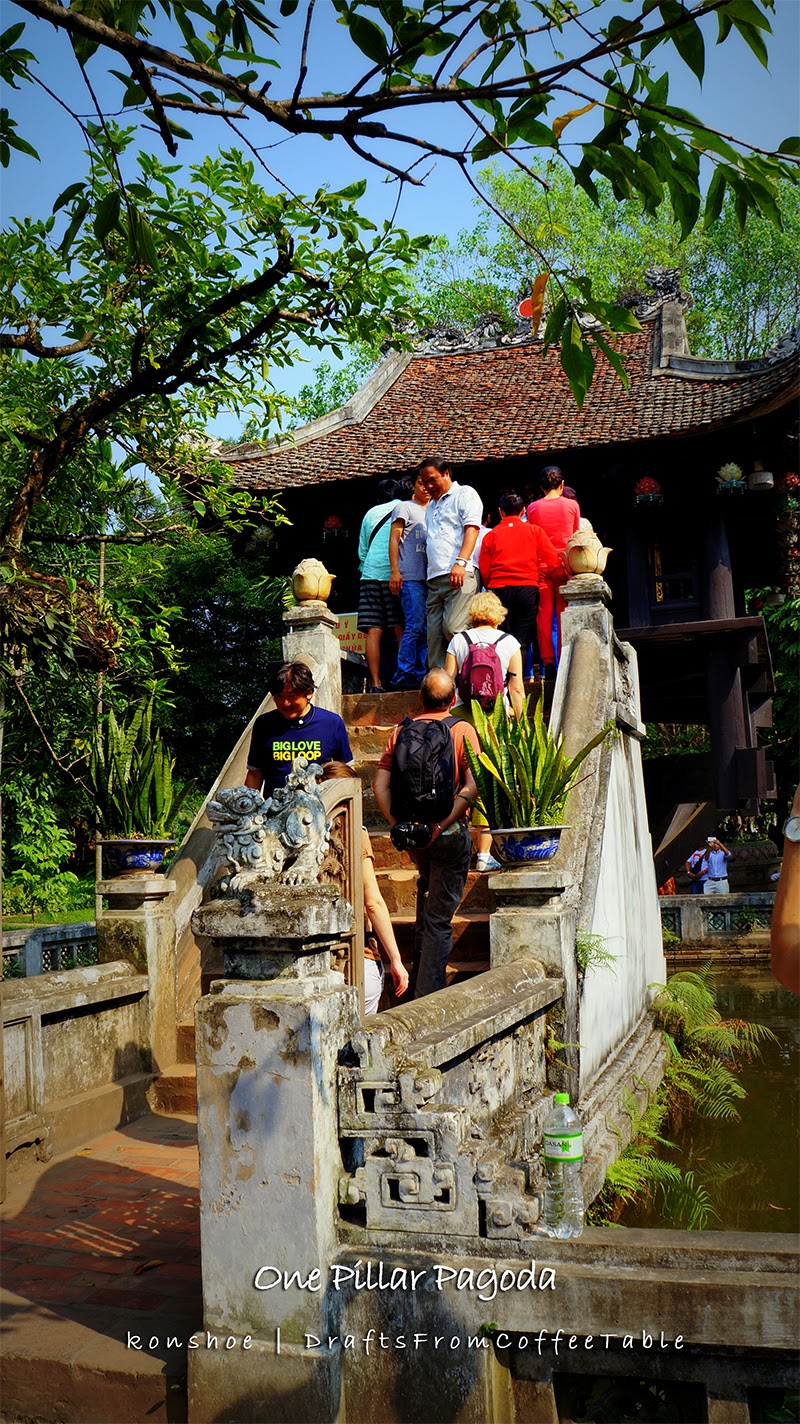 Traditionally, the emperor would approach the One Pillar Pagoda on Vesak, the birthday of Buddha, to bath a representation of Buddha in the presence of the monks. People from near and far would gather to witness the annual event, and later follow the bird released by the emperor after the bathing ceremony.

Despite the long history behind this pagoda and being revered by the people, its close destruction came in the 1970s, from the hands of the government. With Ho Chi Minh Mausoleum completed nearby, there was suggestion by senior government officials that the pagoda be demolished for being not conforming to the mausoleum. It was only widespread protests stemming from historian Tran Quoc Vuong which saved the pagoda's fate.

We ventured around the temple proper and found other interesting areas within the compound not shared usually on guidebooks. A side to the lotus ponds stood two smaller pagodas, vertical shrines for further offerings to be made by the faithful, one in white and the other in red. They could not compete in magnificence with One Pillar Pagoda, but they were hidden partially within a grove of trees, so finding them was akin to discovering the hidden remnants of a long gone civilization. The sense of discovery alone was worth the time to walk the short distance to it. 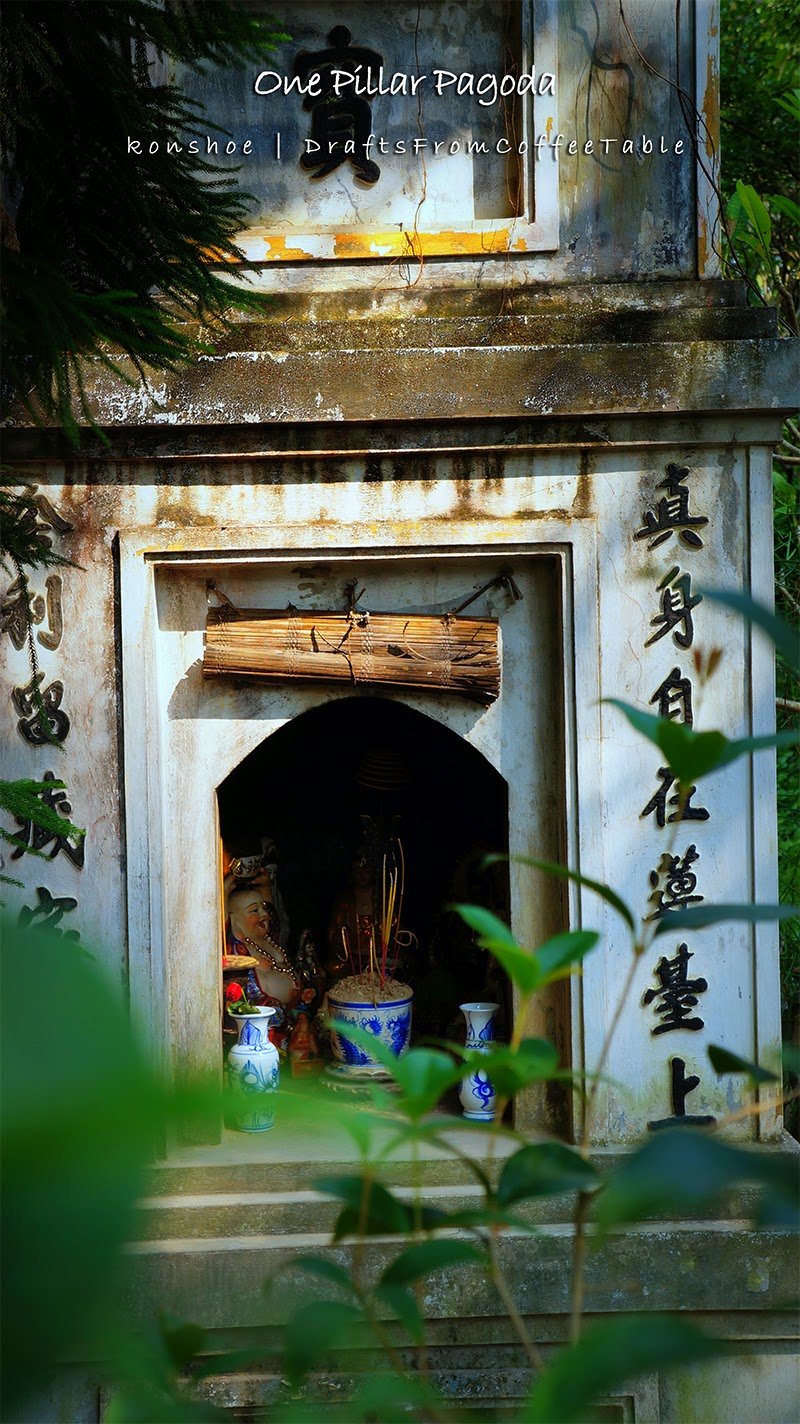 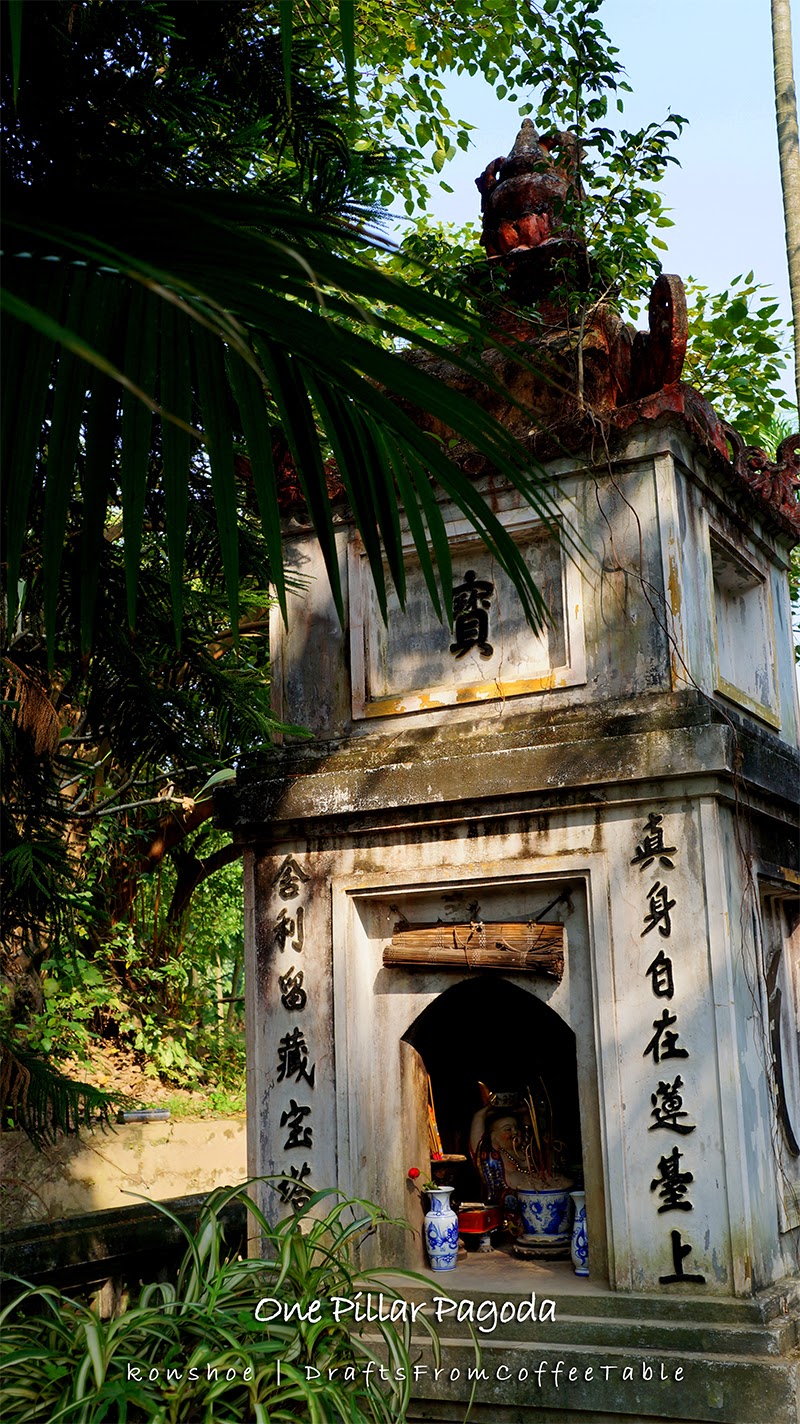 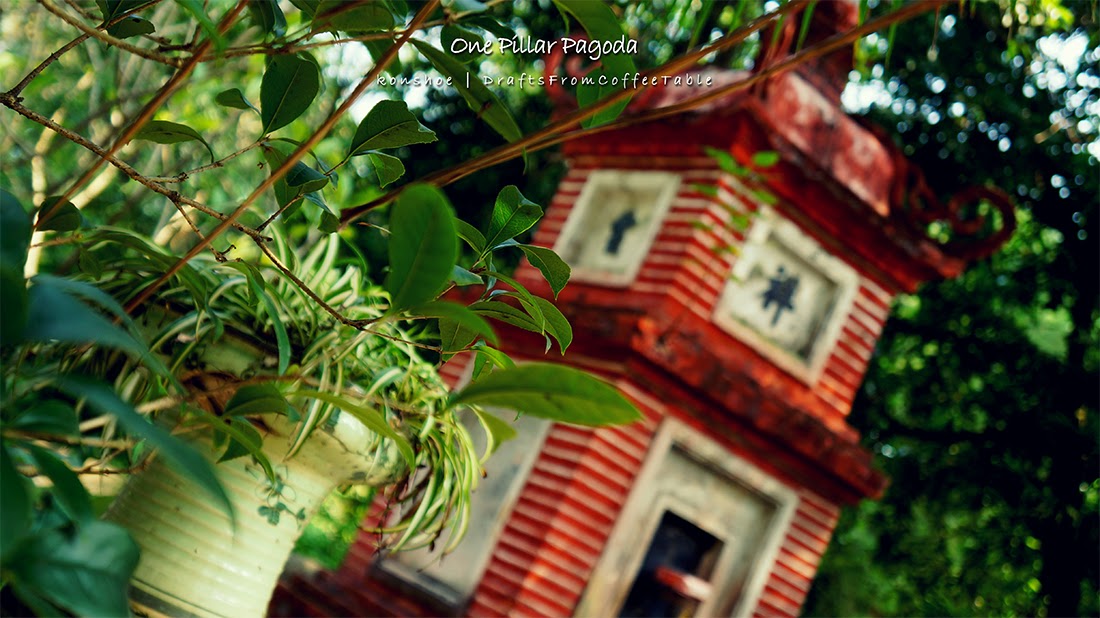 Another area worth taking a look would be a sky reaching tree behind the One Pillar Pagoda. A closer look revealed that this was no ordinary tree, but one which was sacred to Buddhism. The bodhi tree hovered protectively over a small statue of Gautama Buddha, with simple and austere adornments of flowers nearby, an incense urn in front for the faithful to offer their prayers. This was another part of the compound nearly untouched by visiting tourists, allowing the faithful to visit Buddha in relative serenity. 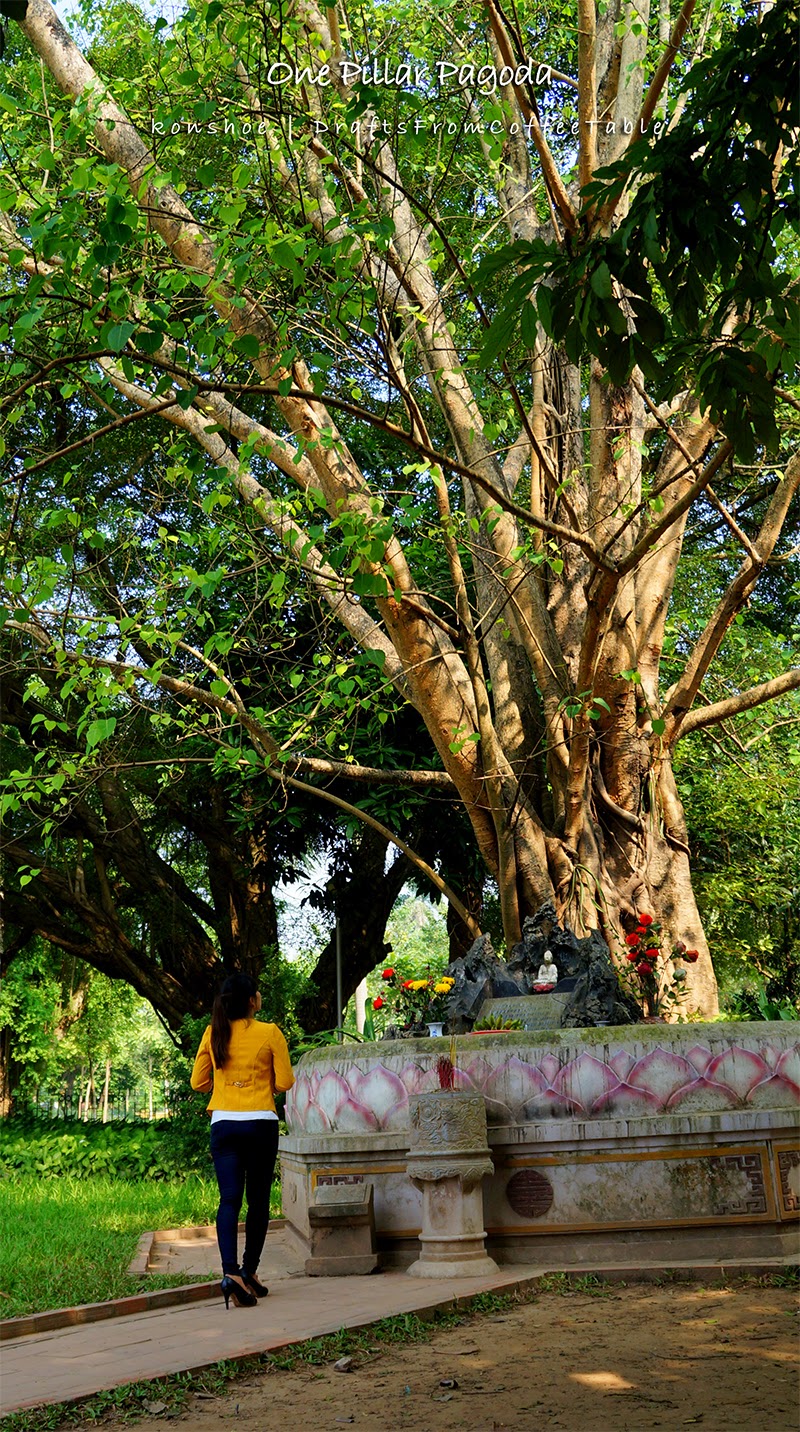 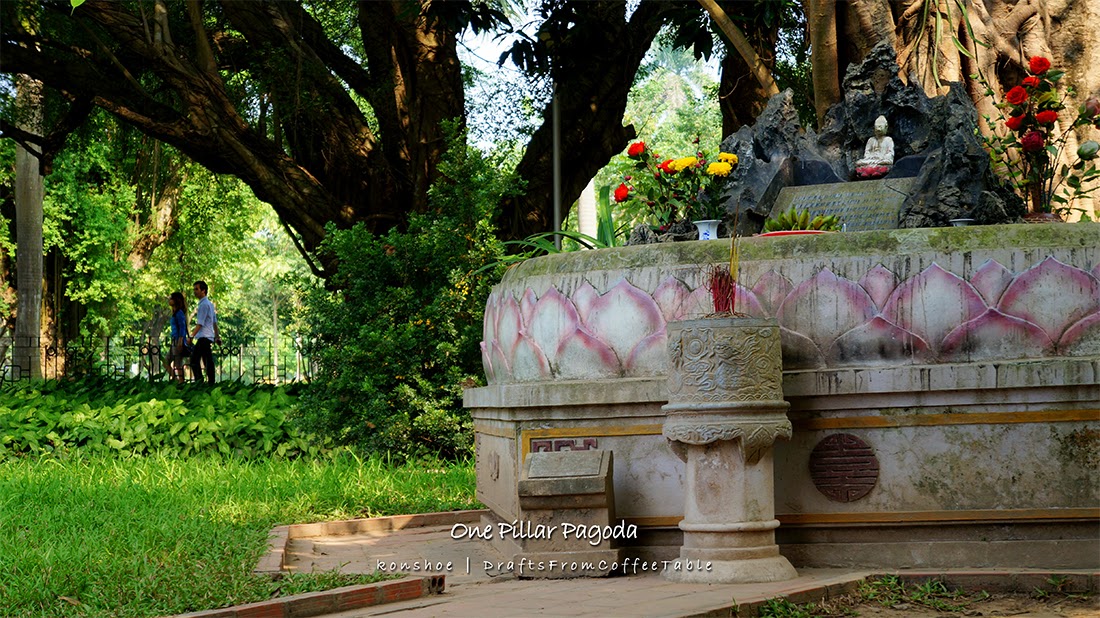 Viewing One Pillar Pagoda could be a challenge depending on the amount of pilgrims and faithfuls within the compound, as well as the number of foreign and local tourists. It is well advised that if you are not there for being in the midst of people, avoid Buddhist festivals like Vesak. The pagoda could also be seen from a distance when one is outside of the temple proper, in the area of Presidential Palace's exit lies. If the crowd gets too much, remember to be patient. This is after all a sacred place for locals, not a place built for tourists. The latter is as much a nuisance to them as tourists may felt.

Environment:         A pagoda on a pillar in the center of the city.
Suitable for:           To see the rebuilt pagoda forming one of the most defining icons of Hanoi, as well as Vietnam.