A landmark is the beacon which tourists invariably flock towards upon visiting a location. Without such prominent markers of a location, a nation or city would lose its identity in the mind of tourists. In the South-East Asian countries, such landmarks are numerous, ranging from the historic Angkor Wat and Ayutthaya to the modern Marina Bay Sands and Petronas Twin Towers.

Visitors to Hanoi would be hard pressed not to seek out Ho Chi Minh Mausoleum regardless of their ideology. This is where the body of the nation's founder, President Ho Chi Minh, lies embalmed. And this is also the landmark of Hanoi, one which immediately reminds people of the city despite its relative youth in the millennial city.

Most accounts and articles on this mausoleum agree on one thing: if Ho Chi Minh had it his way, this structure would not even exist. The revolutionist and founder of a nation wanted a simple cremation, his ashes scattered across the country. What he got upon his death however was one of the grandest memorial in the world, and definitely the most iconic structure of Hanoi.

The leaders of Vietnam began works of construction of this mausoleum a few years after Ho Chi Minh's death in 1969. Ground breaking officially commenced on September 2, 1973 and the mausoleum was completed with an inauguration on August 29, 1975. The leader's body was then treated in the same way as other famous Soviet leaders - embalmed and displayed in a grand mausoleum standing in the middle of a historic square for people to visit and to revere. 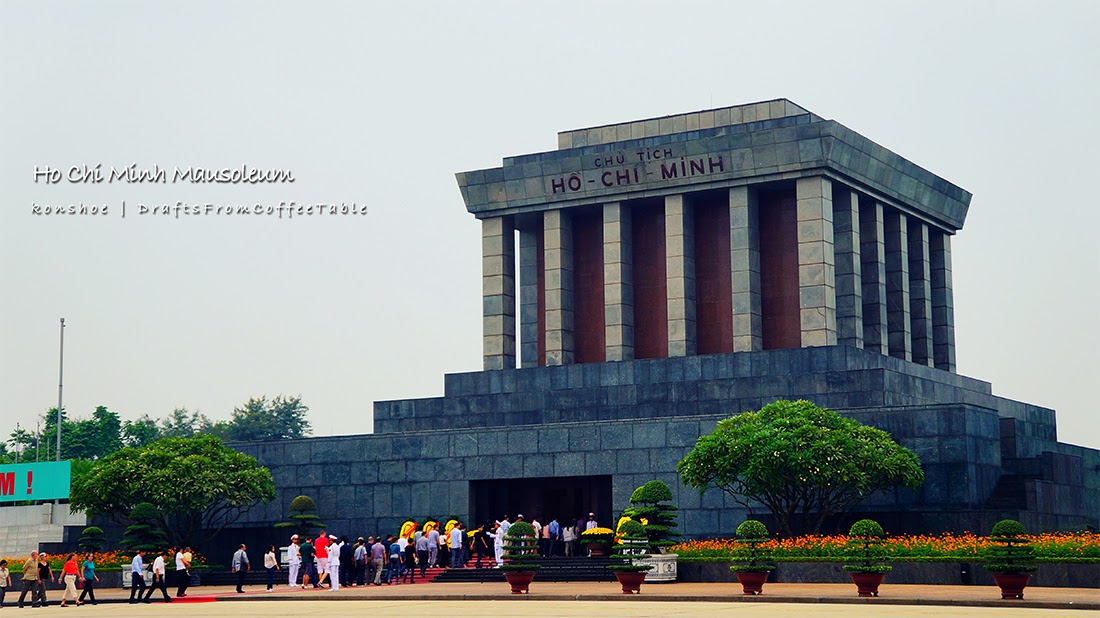 I learnt later that the square was a historic pavilion where Ho Chi Minh declared Vietnam's independence on September 2, 1945, Ba Dinh Square. Iconic images of the mausoleum are usually taken in this square, facing the structure at an oblique direction.

Gray granite formed the building blocks of the mausoleum as well as forming the exterior wall. The iconic cubic mausoleum lies on top of a tiered base, supported and surrounded by equally squarish columns. In stark contrast to the grim memorial however are floras from around the country being planted in beautiful gardens, forming a truly wonderful environment for the body of a deceased leader.


We had the misfortune to arrive at Ho Chi Minh Mausoleum during the closure of the memorial. For close to two months every year, somewhere between September to November, the mausoleum has to close down and the body of Ho Chi Minh sent to Russia for maintenance (yes, the embalmment  needs maintenance). So it definitely would be wise to check ahead with your tour agency or hostel clerk regarding the mausoleum's closure if you are visiting during those months. Interestingly for us though, both the tour guides and hostel receptionists knew that the mausoleum was closed for maintenance but not when it would reopen.

Fortunately for us though, the mausoleum reopened on the last day of our trip, November 7, and we managed to get a glimpse of Ho Chi Minh before we left Hanoi. We joined a super long queue of people, a nearly equal mixture of foreign and local tourists, walking towards the check in counter where our camera and electronic devices needed to be checked in. If not for the aforementioned gardens, the walk would be rather tiresome, lasting close to 20 minutes before we reach the counter, and that was another 20 minutes before reaching the mausoleum entrance even.

There will always be locals (as well as some foreigners) cutting the queue past the shuffling throng, indifferent and oblivious to the indignant glare of foreigners, so be patient with these people. Long the queue may be, but at least it was moving albeit at a snail's pace. Once our bags were dropped at the counter, we were given a tag for collecting them upon the end of our visit. With that matter off our hands, we continued shambling with the crowd until we reached the mausoleum entrance. It was only in hindsight did we realize we had walked from one end of the mausoleum grounds to the entrance. 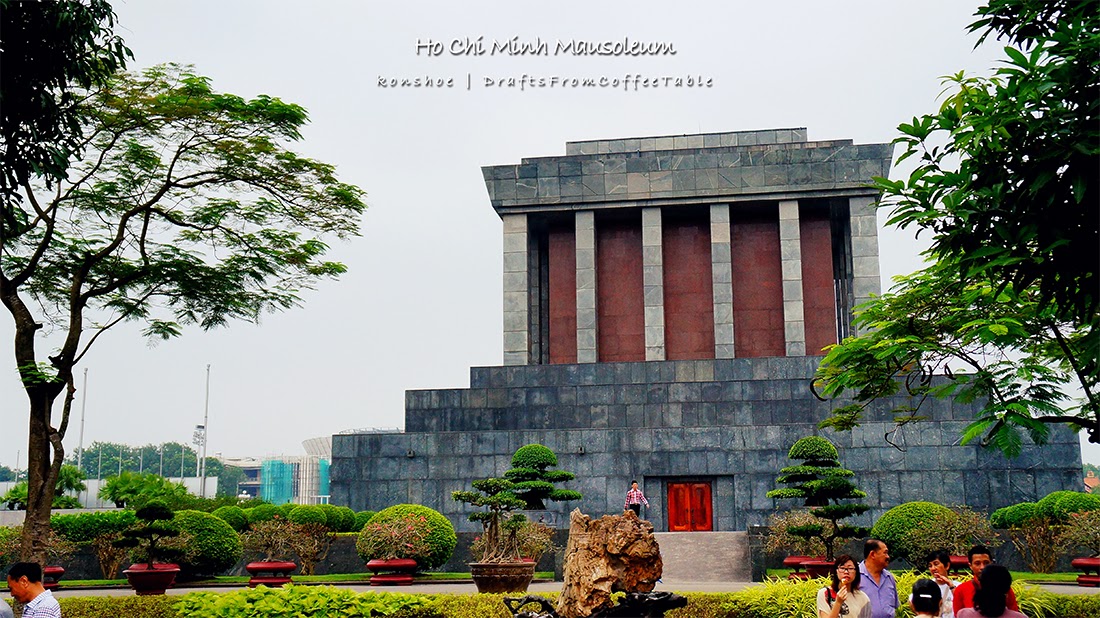 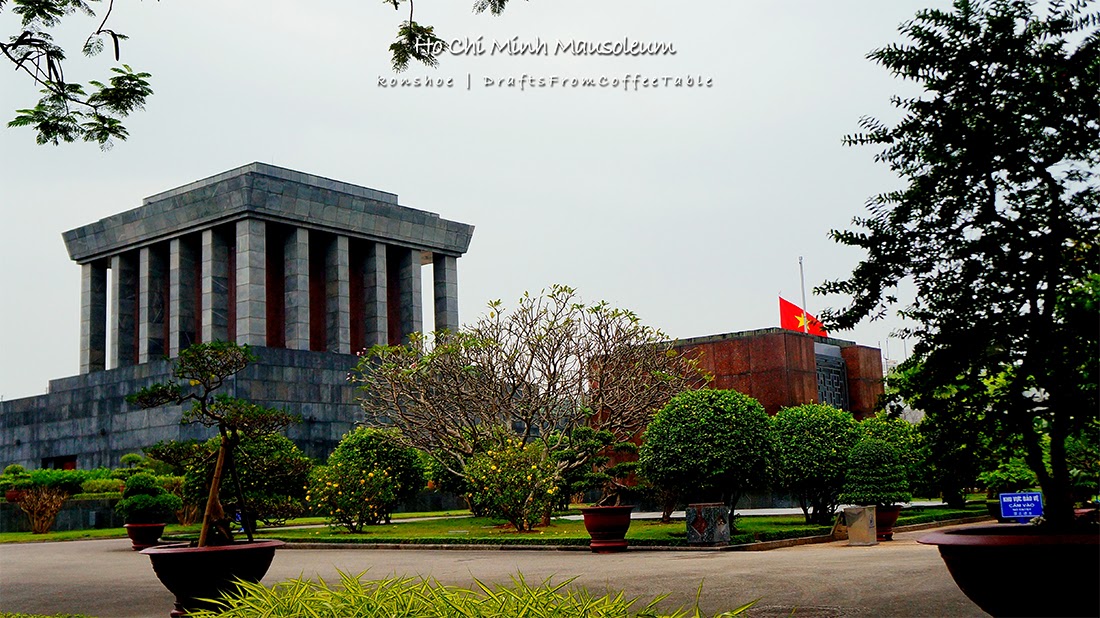 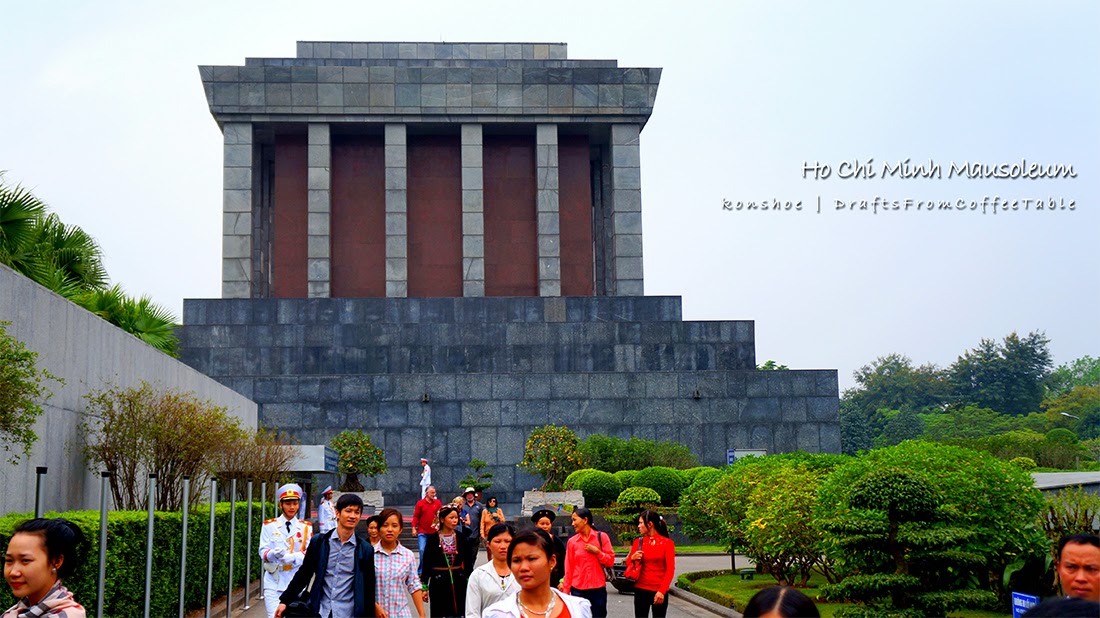 The interior of the mausoleum was not vast, surprising considering the size of the mausoleum from the outside. However the corridors were wide enough to accommodate two abreast with much room to spare. We noticed that the interior was rather dimly lit and cold, lending an even grimmer and dour sense of the place. Honor guards stood at intervals along the path, silently staring at passersby with an air of indifference. And shuffled we did along the somber corridors until we reached the heart of the structure, the small area where everyone wished for a glimpse of.

We entered a rather small area where everyone's attention was fixed on the dais in the middle of the room. Encased within a glass sarcophagus was the body of Ho Chi Minh, the nation's leader. He looked rather serene, lying within the sarcophagus with hands clasped and sandals on as if asleep, with only the waxy face betraying a hint of his embalmment. The overall lighting was dim in this inner sanctum, making the amber light shining on the body all the more eye-catching. A curious glance above revealed a tall inverted tiered ceiling.

It took us more than 30 minutes to reach the heart of Ho Chi Minh Mausoleum but less than 5 to walk past the body of the deceased leader. 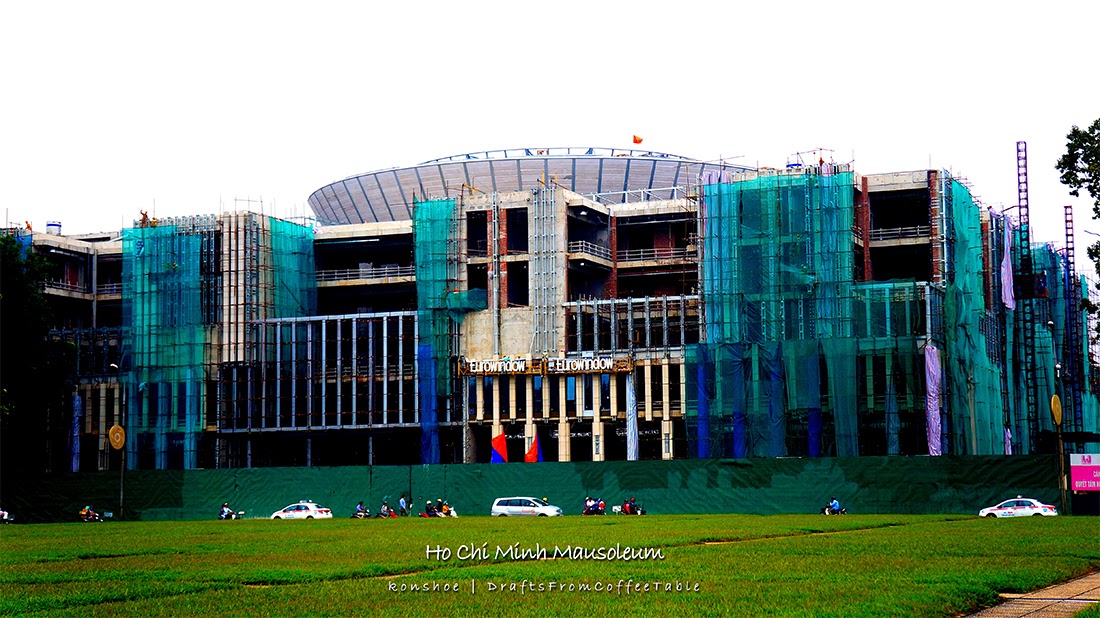 Most guides will recommend in a short sentence one other event to witness while visiting Ho Chi Minh Mausoleum - the changing of guards. I however recommended strongly to be there at the right time to witness it. We were at the guard post nearest to One Pillar Pagoda (read more on our adventures in 2013 Hanoi Trip - One Pillar Pagoda) on a day when the mausoleum was not available for visit, and we witnessed the guards marching over in tandem and in style, with one of them exchanging place with the current one. Thanks to the lack of visitors around the area, we could snap as much photos as we would like to without the hindrance of people blocking the view. 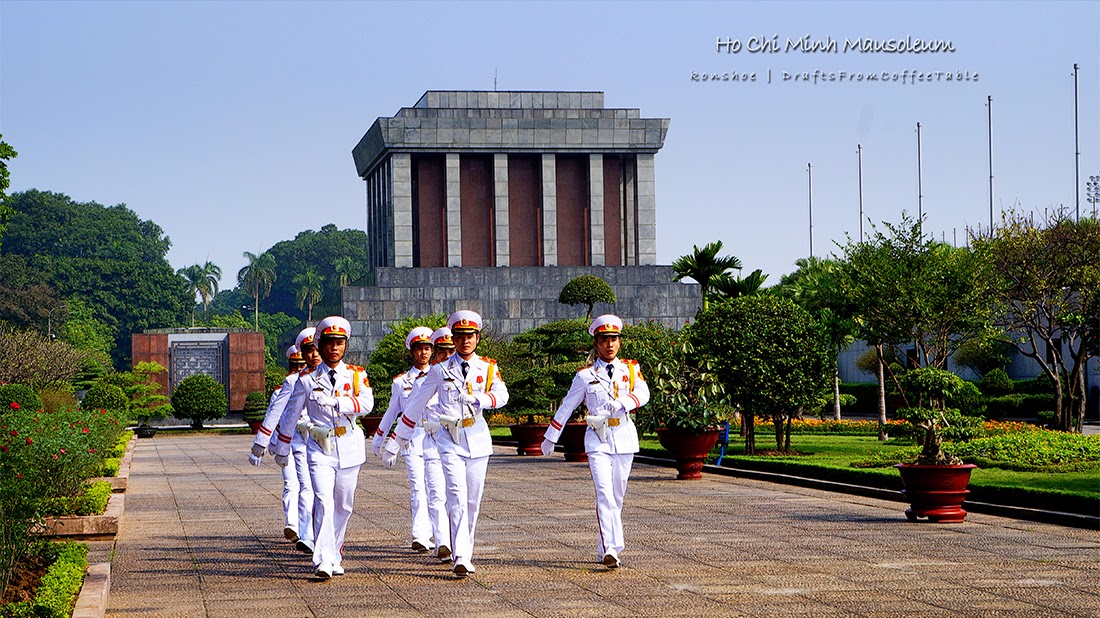 Is there mausoleum worth visiting? I would say it depends on your purpose. One may not hold much interest in the bygone communist days of Vietnam of for the deceased leader of this nation, but the monument itself is such a landmark of Hanoi that one could barely claim that one has visited the city without snapping a photo in front of the edifice. Following the queue may not be necessary for most, if you are only there to take a picture of the gray facade.

A visit to the mausoleum may prove inevitable in the end since Ba Dinh area held some of the most iconic as well historic areas of Hanoi. There was One Pillar Pagoda, a reconstructed millennium old icon of Vietnam, and a recently unearthed Thang Long Royal Citadel, with a history as long as the former but an unrivaled footprint which extent is still being discovered.


Environment:      A mausoleum standing in the middle of a historic square
Suitable for:         To see the remains of a leader who helped form a nation
Visit worthiness:   7.5/10 (most of your time is spent on queuing, no photographs allowed within the mausoleum )