It is surprising how we compare foreign food experience with what is familiar back home. Similarity can, more often than not, allow us to resonate with a dish which we may not know how to pronounce yet remember the taste as good as if we have tasted it daily. Such is the case for bánh cuốn. And we tasted the best yet in Bánh Cuốn Gia Truyền.

And in case you wonder how to read it, bánh cuốn, is pronounced close to "baan guan". 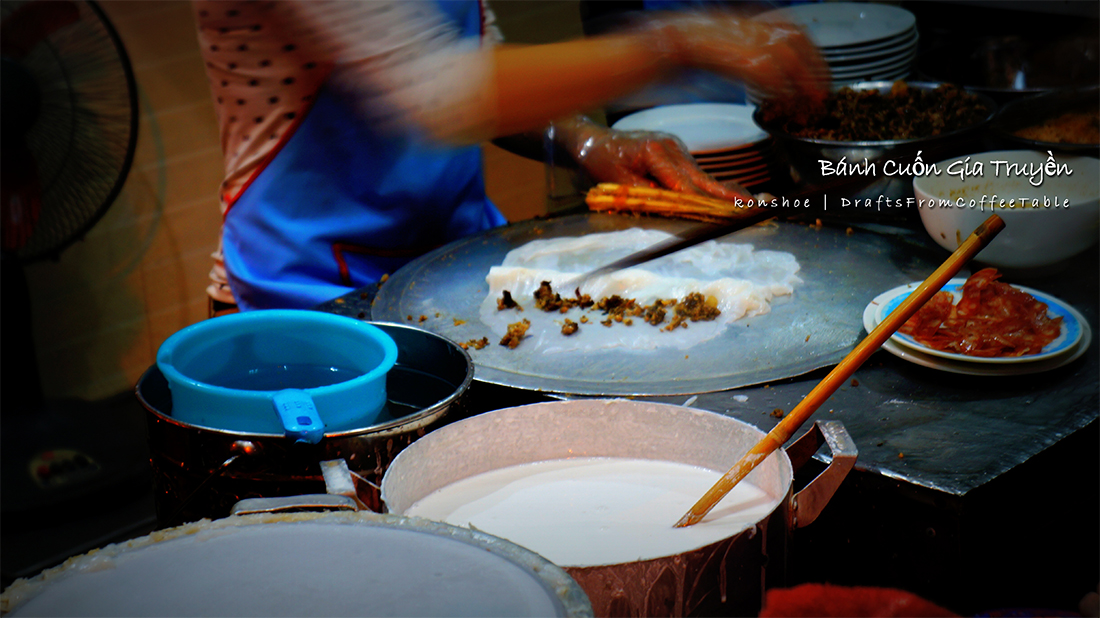 The first impression which Bánh Cuốn gave us was its similarity to chee cheong fun (猪肠粉) (the Hong Kong variant instead of the usual Malaysian and Singaporean version; to know how the former looks like, read my account in 2012 HK Trip - Good Start Restaurant 囍点). It was served in the form of a steamed roll of rice batter filled with delicious ingredient, the latter of which depended on what we wanted.

Bánh Cuốn Gia Truyền had 3 different variants up for offer - pork fillings, chicken fillings and shrimp fillings. To aid readers in knowing what to expect, I have listed them as was shown in the menu, although English names were assigned to each dish, so non-Vietnamese diners would have no problem ordering their dishes.


It is one of Hanoi's favorite breakfast item, but we foreigners ended up taking it for supper. It matters not what time of the day you take it, for it is truly one of Hanoi's representative food, part of a list of must-try food when one landed in the city.

To sample bánh cuốn, it is essential to understand how it is usually consumed. By itself, the pale white rice batter is silky smooth and soft but otherwise rather bland. This is where the filling comes in to lend a solid texture and adds flavor to the roll. Hong Kong's favorite chee cheong fun comes in uncut rolls, but bánh cuốn is served sliced up into manageable chunks.


To further distinguish itself from the former, it is served with a separate bowl of clear amber dipping sauce, a bowl of nước chấm, essentially fish sauce or fish soup in Vietnamese. The owner noticed our blank look when the aqueous sauce was served, so with some miming (he couldn't speak English very well, but was still very helpful) he explained that we were to dip the lumps of bánh cuốn into it before consuming.

The dish of bánh cuốn was so delicious that we ended up eating most of them without dipping, the flesh contained within the roll flooding the palate with sweet meaty goodness. Dunking it into the sauce would lend a sweetness to the dish, and when we curiously took a small sip from a scoop, it tasted different, itself a slight sourly taste. How it added sweetness to the bland rice batter is truly a mystery.

We availed ourselves to all three variants of bánh cuốn during our stay in Hanoi, and we unanimously concluded that the pork version was the best. The fleshy taste just found no competition in the lighter shrimp and chicken variant. 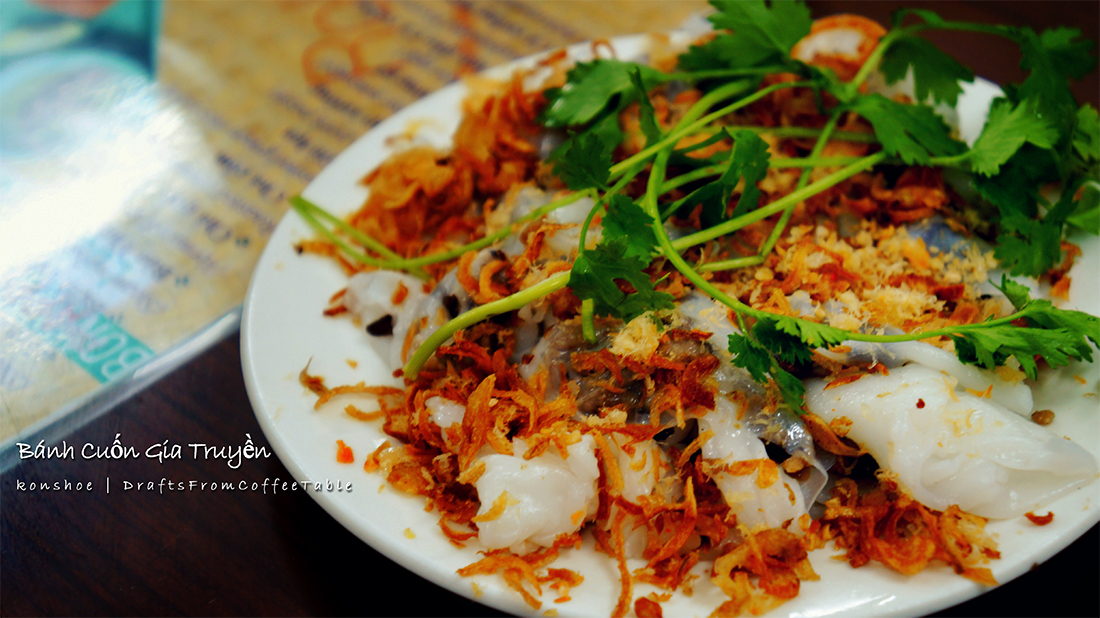 Bánh cuốn may be the main dish under Bánh Cuốn Gia Truyền's namesake, but it was not its only offer. Heavy diners like me would not survive the night with just bánh cuốn in my stomach, however tasty it is. Fortunately the shop had another Hanoi culinary favorite, bún thang.

The similarity of bún thang to one of our local dish, shredded chicken noodle (鸡丝粉) is rather striking. A bowl of steaming vermicelli immersed in tasty chicken broth was served to us, and the broth was seductively fragrant. Sweet taste of chicken filled the bowl and permeated into the vermicelli, bringing with each string an unparalleled experience. Pick up the tender flesh of chicken to add a solid yet chewy texture. Positively awarded with multiple thumbs up from all of us! 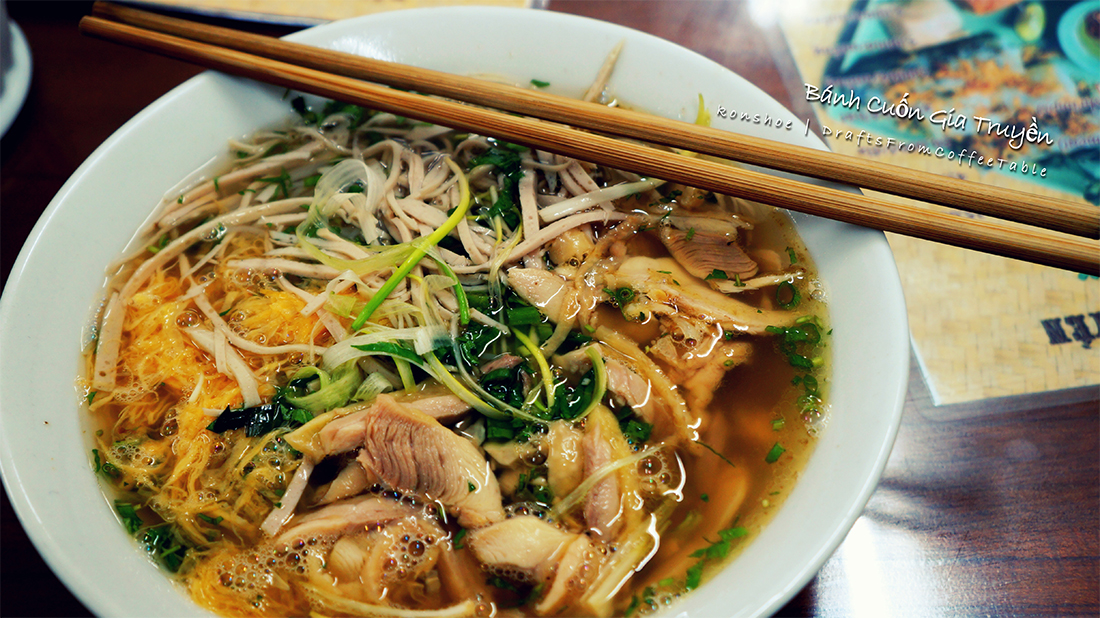 Bánh Cuốn Gia Truyền offered other dishes apart from bánh cuốn and bún thang. Locals usually get themselves cubes of châ quế (roasted cinnamon pork) to go with bánh cuốn. It came as a cube of pale white pork with invitingly brownish top. The taste of cinnamon was not very strong, bordering on nonexistence. We tried giò lụa (lean pork paste) as well, a piece that was similar to châ quế minus the brown top and cubic shape. We were indifferent to the taste of both of these local delicacies. One could think of these as part of the main dishes just as we would order yong tau foo (釀豆腐) to go with any noodle orders. They were close to tasteless barring the taste of pork when consumed alone, but served as a nice side dish. Worth noting is the fact that giò lụa is the way it is called in Northern Vietnam, but it is called chả lụa in Central and Southern Vietnam.

However one other side dish which we found delicious was lạp xưởng, the Hanoi version of Chinese sausage. It was actually not different from the one which we are familiar with in Malaysia, in taste and in texture - they are both as delicious as the other. 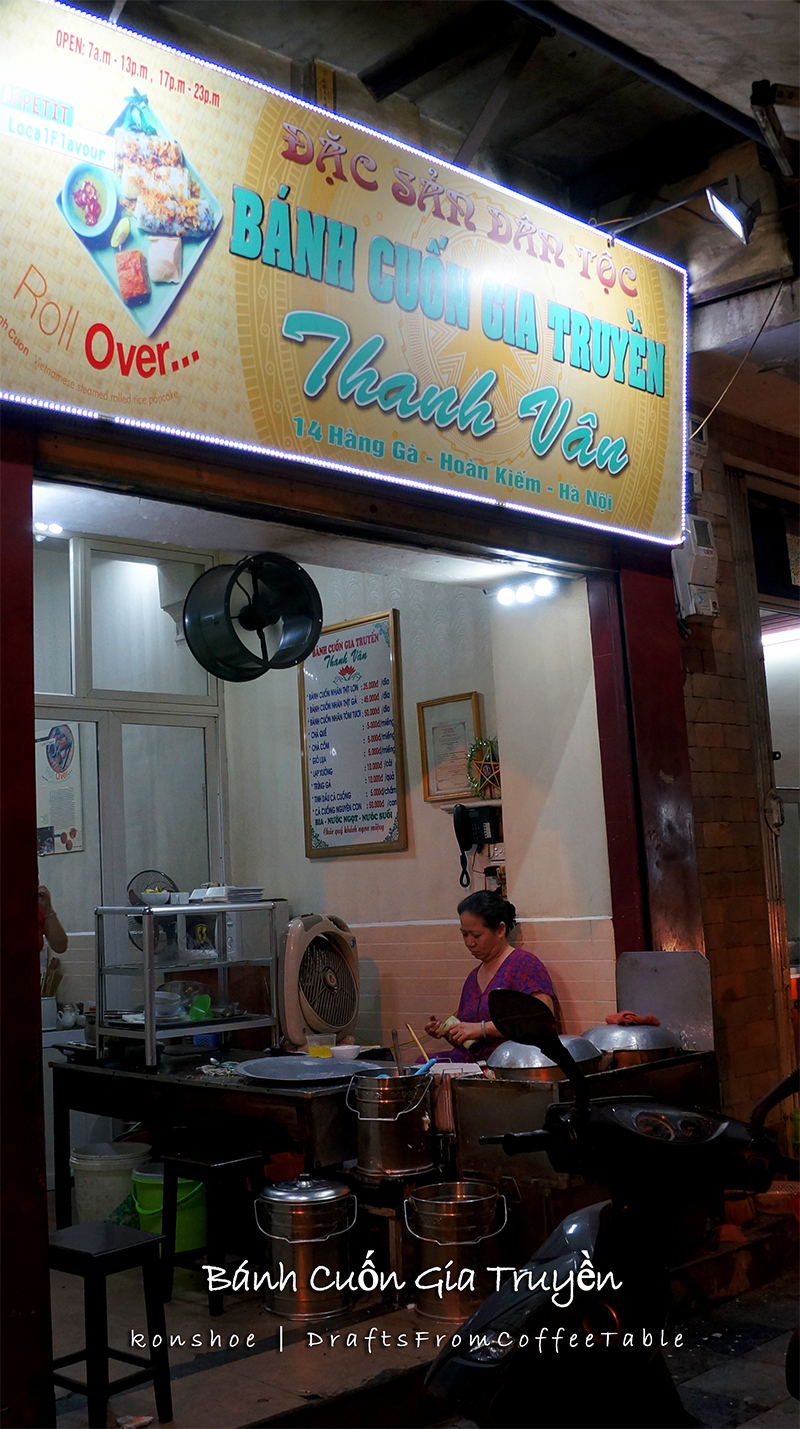 In case Malaysian readers are using this as a guide to know what to order when visiting Bánh Cuốn Gia Truyền (or any other bánh cuốn shop for that matter) below is a list of comparison between Hanoi delicacies and local delights of Malaysia.