Sometimes stumbling blindly around during a backpack trip can be a bad idea, but there lies an equal chance of being pleasantly surprised as well. In the hours before our session of water puppet show began on the first day of our trip, we were tired from a day long walk around the Old Quarter. A cursory glance above our heads revealed a cafe in one of the neighboring buildings of Thang Long Water Puppet, except that we couldn't find the way to go up. 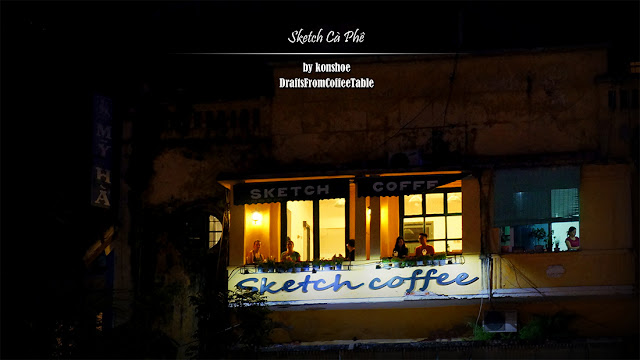 Realizing soon that our search for a way up was futile, we asked a lady running the shop right below the spot where the cafe should be located. We could have given up and looked for another spot, but the fact that we did not was a good thing in hindsight. There was an inexplicable allure which drew on us when we spied the cafe from beneath. Maybe it was the warm light perpetuating from the interior against the darkening dusk, or maybe we just too tired and long for a drink that we gravitated towards it like a moth would to a bulb.

Imagine our surprise when the lady pointed us to a dimly lit alley right next to her shop, running between the 2 buildings. We glanced askance at her, at which she asked "Sketch Coffee"? We nodded. She nodded even more enthusiastically, waving us into what any sensible traveler would not enter. We were not sensible at all. Doubts sped through my mind, but with a gang of four behind me, I manned up and took the lead into the dark.

The alley turned out not to be an alley but a walkway leading into the interior of the same building where the shop stood. It was just a corridor with its light yet to be switched on (which would appear much less scarier when it was switched on on our way out later). With buildings in Hanoi packed closer than sardine in a can, it seemed that there wasn't even space for an alleyway - buildings were leaning against each other left, right and at the back. What the walkway brought us into was a small courtyard (really small) and a staircase leading up.

Once again, I lingered at the bottom, mulling over the choice to continue forward or turn back to the vibrant cityscape. I took a step deeper into darkness. Noises from a television set above did not raise my spirit anymore than the dark corridor did, and I was rather sure that we made a mistake of entering a residence instead of moving towards a warm cafe until another lady walked past the ever slower gang (that's us).

She looked askance at us, at which we asked "Sketch Coffee"? She pointed up, "Yes, yes", and continued up. At least we were sure we were not entering the den of thieves like how those Hong Kong movies loved to portray. Again, we moved slowly upward, until we saw the warm light of the cafe. The resident with the TV set was right next door, looking no more menacing than a noisy family.

We had been frightening ourselves with too many movie nights.

I would be the first to admit that the route leading up to Sketch Coffee, as well as the cafe itself, was full of new experience as well as pleasant surprises, especially for one who wished to understand the culture of the city I was visiting. The cafe was situated in a very strategic position over a major crossroads next to Hoan Kiem Lake, thus granting a chance for coffee sippers to watch the busy traffic at a small balcony made for this purpose. We just spent some time capturing images of the bustling life on street from this great vantage point. The view would have been picture perfect if not for the line of tall trees blocking the lake from the line of sight.

With Hanoi's infamous traffic running full force outside, even the view from the balcony was not reason enough to stay too long outside the comforts of the cafe. 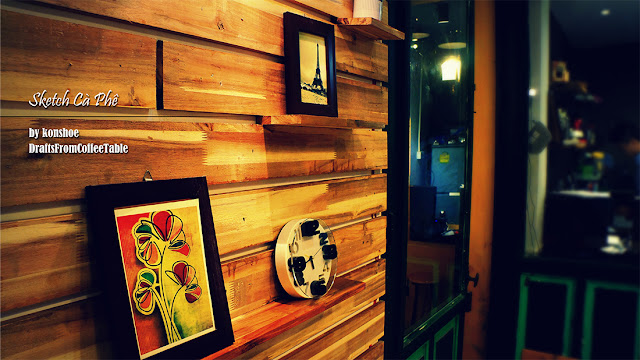 It was rather obvious that Sketch Coffee put more than just some thoughts into decorating its cafe. While we were basking in the warmth of the amber light, I noticed that the decorations employed little items which reminded visitors of France, with some art utensils thrown into the mix to reflect the namesake of this little cafe. Flowers adorned corners and tabletops, with miniature Eiffel Tower dominating one of the shelves while framed art pieces sought to embellish the rest of the place. Some of the adornments even brought back old memories, with a decorative gramophone and rotary dial telephone being the most nostalgic.

It was as if we entered into a cabin from a cold night, seeking the hospitality of the establishment. To describe the place as a cabin was rather apt, for the theme of the cafe, from the wall to the chairs, relied heavily on bleached wood, granting an illusion that we had entered into a log house. Although the cafe was rather small, allowing maybe no more than 20 persons to be seated comfortably at a time, the owner still managed to make it as cozy possible. The great view from the balcony could afford one an unhindered perspective of the street below, and one could choose to either lounge on the sofa or be seated on higher bar stools. Such was the generosity Sketch Coffee could accommodate even with the limited space available. 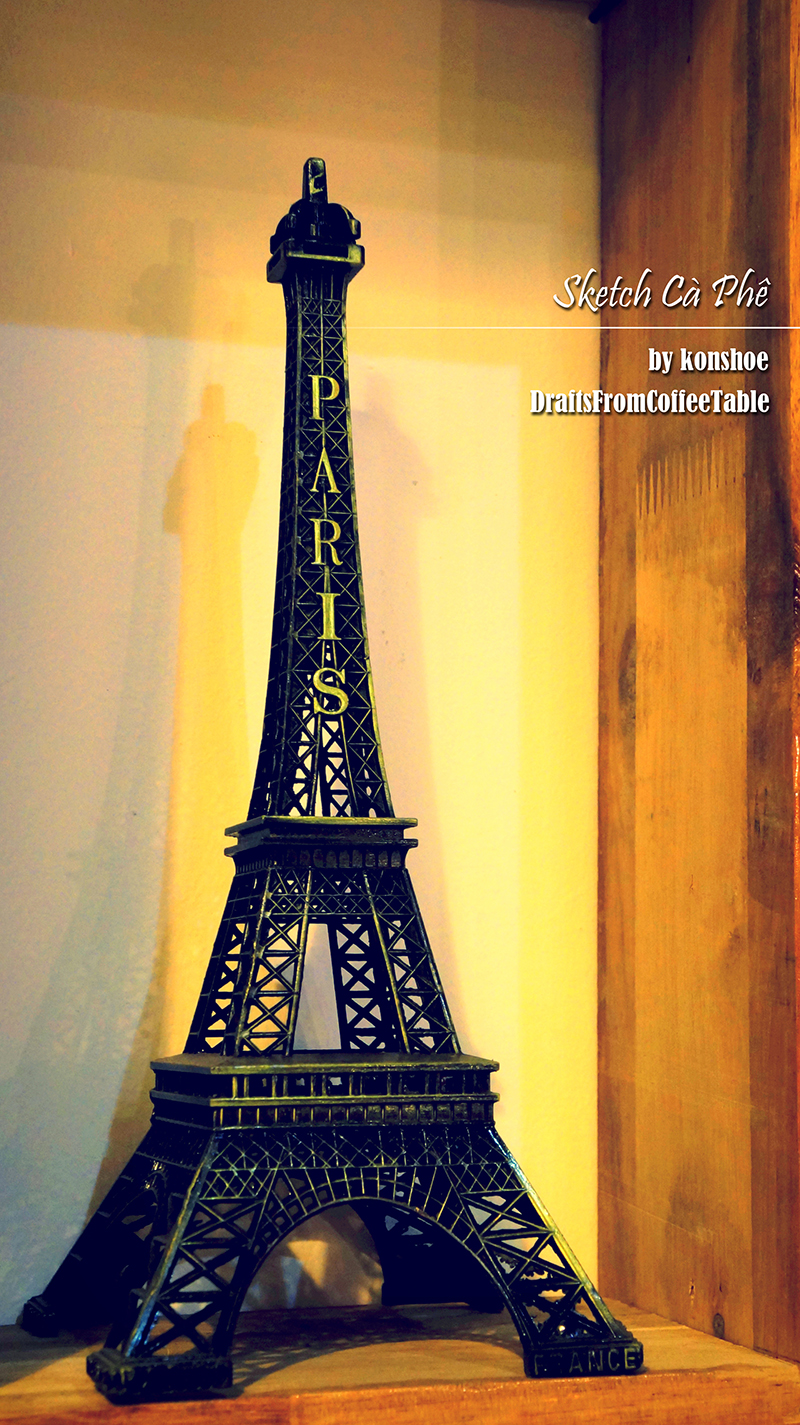 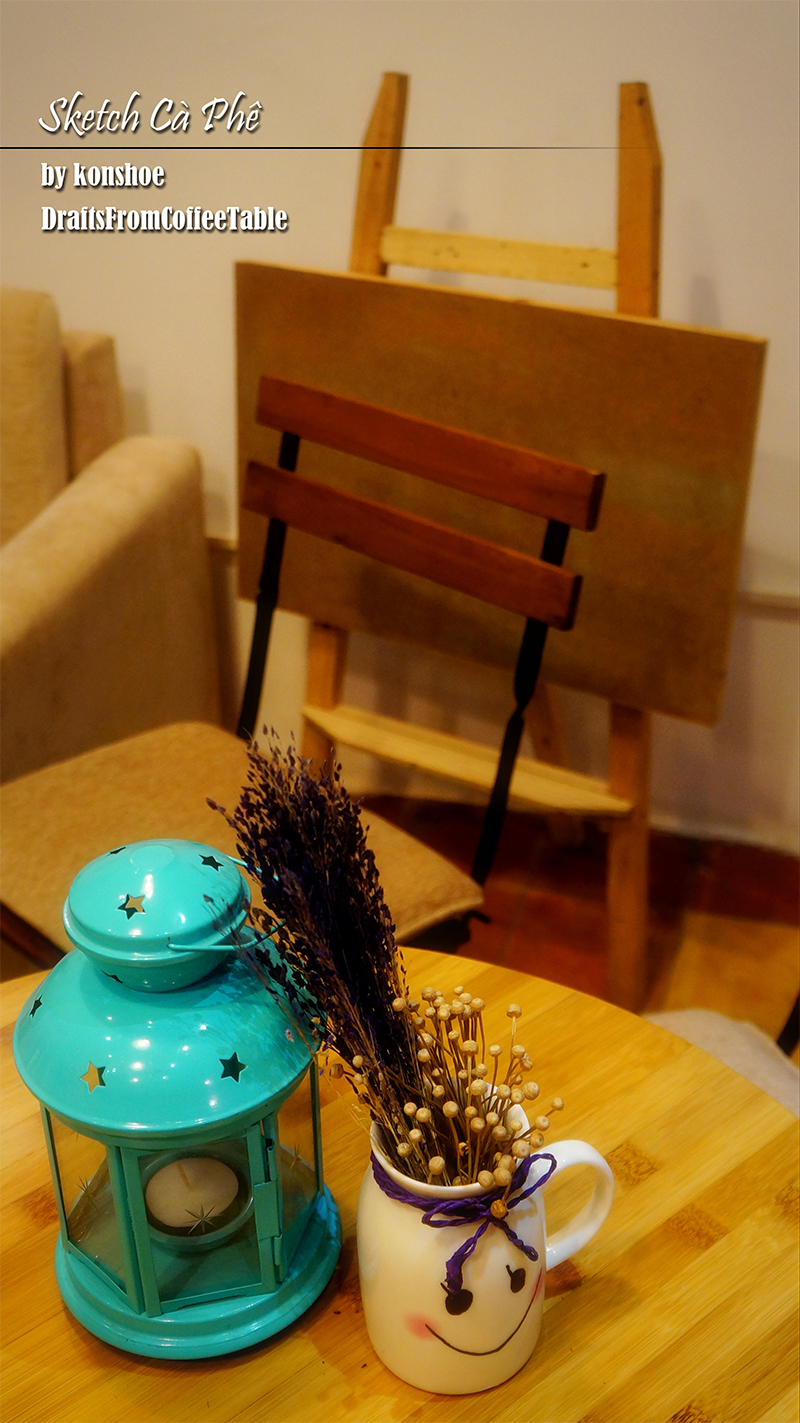 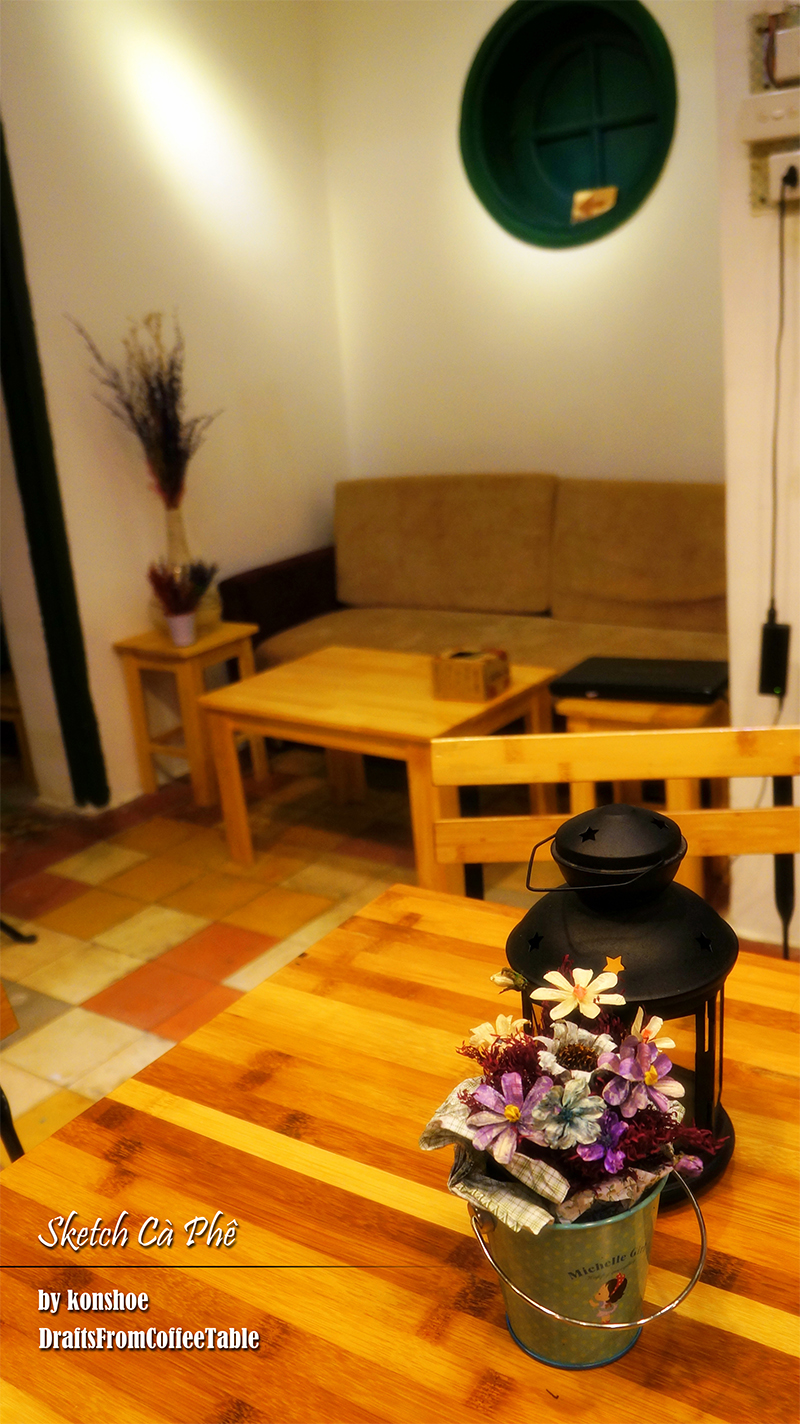 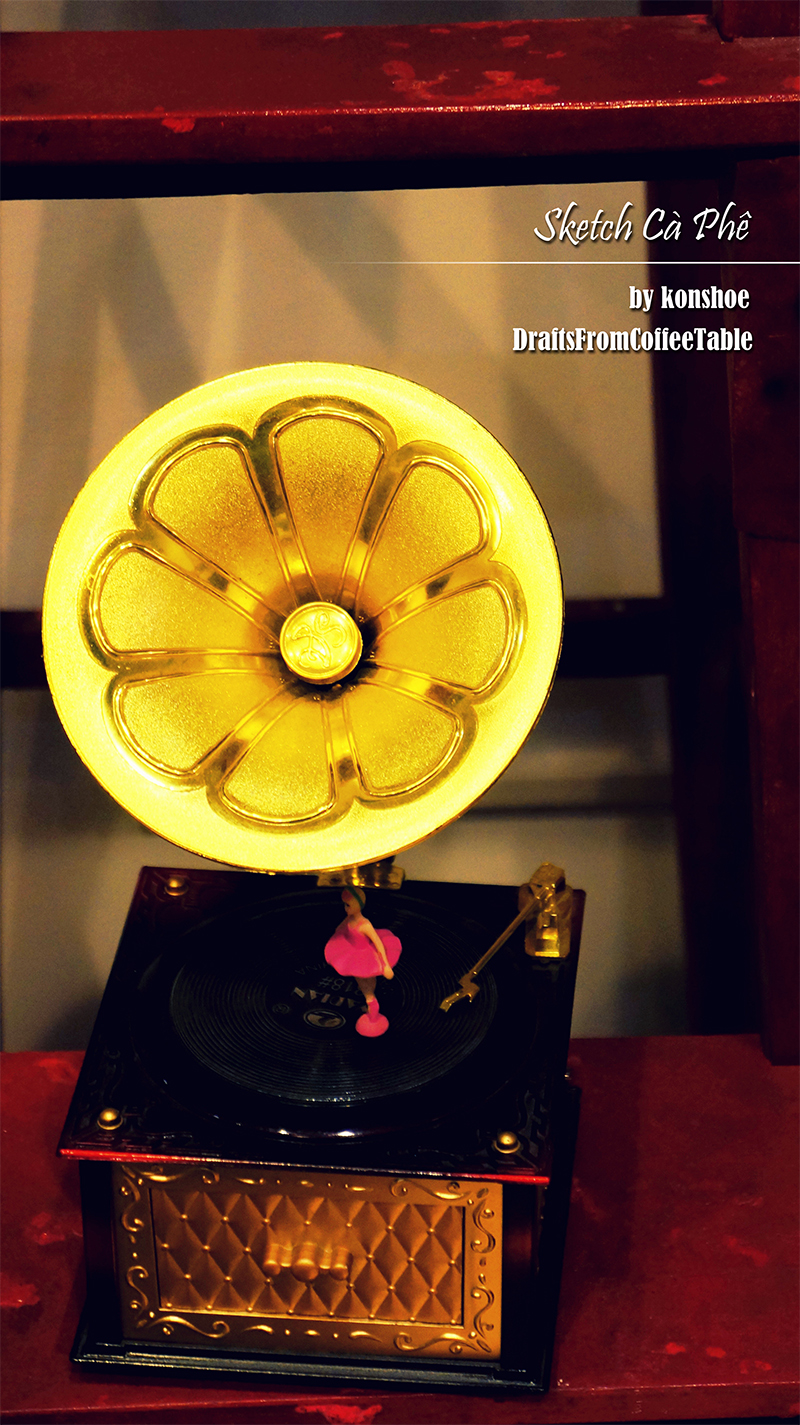 The coffee, both black and milk, was nice, comparable to others which we tried within Hanoi for the days to come. Although the menu was a little confusing, with English mixed with Vietnamese, we still managed it out rather well. One of the more memorable choices we made was a Frapu Tiramisu, which I believed was a loan term from Starbucks' Frappucino since the outcome was an ice blended coffee. It was light in caffeine, comfortably light for one like me who was reducing my daily caffeine intake, but the flavor was remarkably chocolaty, a subtle sweetness hidden behind each draw from the straw yet quickly covered by the equally light chocolate flavor. Down right marvelous, but not for heavy coffee drinkers who demand a definitely stronger brew. 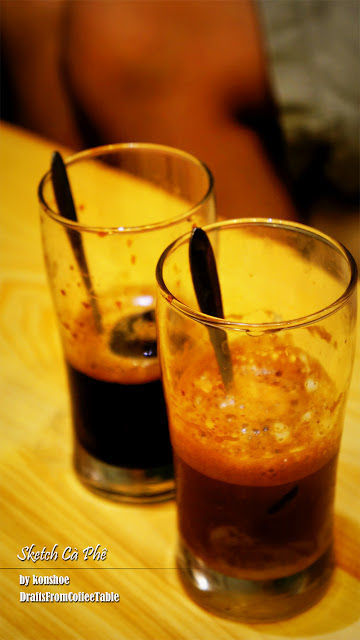 The overall price of visiting Sketch Coffee was not as expensive as one would expect, seeing that the general pricing in Malaysia's cafe would exceed a sip from the street. The 5 of us got ourselves a variety of drinks, spending only about VND23,000 per pax, equivalent to an approximate RM3.70. You wouldn't be able to get away with that kind of price in Malaysian cafe.

Such a great place and at such a close vicinity to Hoan Kiem lake, not to mention being practically right next to Thang Long Water Puppet Theater, it was located at a very strategic location. Its Facebook page stated it as being operational only since a month ago (October 2013), hence its relative silence among backpackers. It would be a shame if future backpackers did not get to Sketch Coffee for a sip. Even if you doubt it could provide your cup of coffee (that depends on your taste), it would be worthy at least for its view as well as the adventurous route into another resident's property.