Updated: This business is permanently closed.

Pure. Offbeat. Delicious. Infusions. Not sure why these were chosen to form the acronym of the recently opened business in the basement fountain area of Raffles City Shopping Center, but there it was. Gone was the previous establishment occupying the spot, Out of the Pan, a cafe known for its crepes. And out it did. I was rather intrigued as to what The Bakery Depot, the parent company behind the popular Cedele chain of bakeries and cafes, would want to offer with PODI. My experience with Cedele was very positive, and being a frequent patron of its cafes, I decided to give this new establishment a try. To intrigue me more, very little information was available of this restaurant online, leaving a few blog posts and my own imagination to predict what I would get out of this. The establishment was no bling-bling, with simple decorations which afforded a pleasing atmosphere. With an open top where the ground floor hanging over only part of the area, it offered an illusion of open space in a spot where real estate is at a premium. I do applaud PODI's easing of the furniture to provide ample walking space in between. Readers frequenting most of Raffles City's other dining establishments would understand the claustrophobic sense where you are in danger of knocking over someone's glass water at every turn.

I was surprised that with Cedele's modest range of special beverages, from caffeinated treats of Cinnamon Coffee to the acquired taste of Hot Ginger, PODI offered nothing sort of remarkable. The usual brunch goers, obviously part of the target demographics from its menu, could get their morning caffeine from its list of teas and coffees, but I was expecting some special beverages in the menu. The new restaurant would definitely benefit from bringing a few of Cedele's favorites into its menu.


PODI's dishes was another matter entirely. From offerings of all-day brunch to grilled dishes to pastas, it offered pages of items to fulfill your indulgences. Ingredients were appreciatively described underneath each meal, allowing us a glimpse into what we were looking at without the need to decipher it from the name.

A pasta, a brunch meal and an item off the grill were what we ordered to get a taste of what PODI had to offer. We were enlightened to a choice of angel hair pasta, something we had not heard of. It was when I was researching for this post that I came to know its name to be 'capellini d'angelo', literally 'angel hair pasta'. It was a thinner variant of spaghetti, served in long strands just as its cousin is, and we came to compare it to our usual yellow noodle except this is thinner than that.

Once again, PODI surprised us with their choices of pasta, being only angel hair pasta and linguine. It would not matter if the meal listed linguine in its ingredients, as was the case of our ordered Prawn Konbu Pasta. A polite remark to the waitress will get you either pasta to be served. To know that no spaghetti was offered just doesn't sound right for a restaurant which sold pasta as part of its menu.

The grill item was a delight to sample, as was the brunch that was Duck Berry Waffle, although my wife was indifferent to the former, noting that the bread was not as delicious as that from Cedele, a point which I concurred. I enjoyed the drumstick without employing any other utensils apart from a fork. The flesh was well cooked, parting easily along the grains. However I was confounded by PODI's decision to put tangy berries onto the dish and offered a dipping sauce that was sweet and slightly sour. Somehow it didn't feel right to mix both together, and I finished the dish without touching much on the latter. 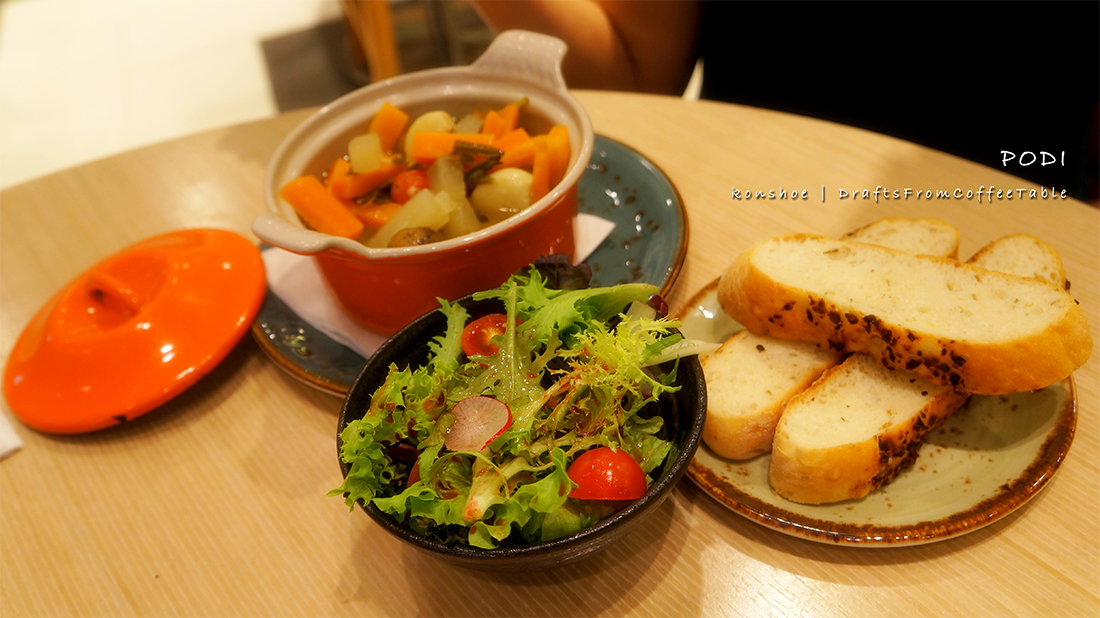 I could only say that The Bakery Depot must have wanted to offer to the public a new concept restaurant by offering dishes different from what one could expect from its cafes. This in itself is a daring move, one which earns my applause. Unfortunately the dishes did not manage to create any lasting impression apart from one of surprise (only two choices of pasta and unremarkable bread for Rustic Chicken Pot), making PODI similar to other all-day breakfast offerings from other restaurants. With Cedele's success and popular offerings, the new establishment could use some of the support from its stabler sibling even though the purpose behind its conception may be to offer brand new dishes.

Its near anonymity in the basement of Raffles City could well be tied to the fact that it did not explicitly advertised itself to the public as related to Cedele apart from a small footnote, a line which font was comparable to that of terms and conditions. A search online did not reveal much about it, with even its own website not fully running apart from a cover page which offered no clue as to what the restaurant's specialty was supposed to be.

Still, I would not advise against visiting PODI. I myself had a good impression of the stabler Cedele, and continue to hold hope for PODI to offer better and novel choices. It would be too soon to comment on its future, one which I have faith will turn out to be as good as my favorite cafe.