Look up for must-try food in Hanoi, and one would not get any explicit recommendation to try kem caramen. It would hardly exist in any of those list, or at least I couldn't see one which it did. Personally though, I would say that one should at least make an effort to try the one in Dương Hoa, for you would not be disappointed at all.

For this successful food hunt, there is my friend and his trusty guidebook to thank for. Chuah Chin Yee, this post is dedicated to you! :) 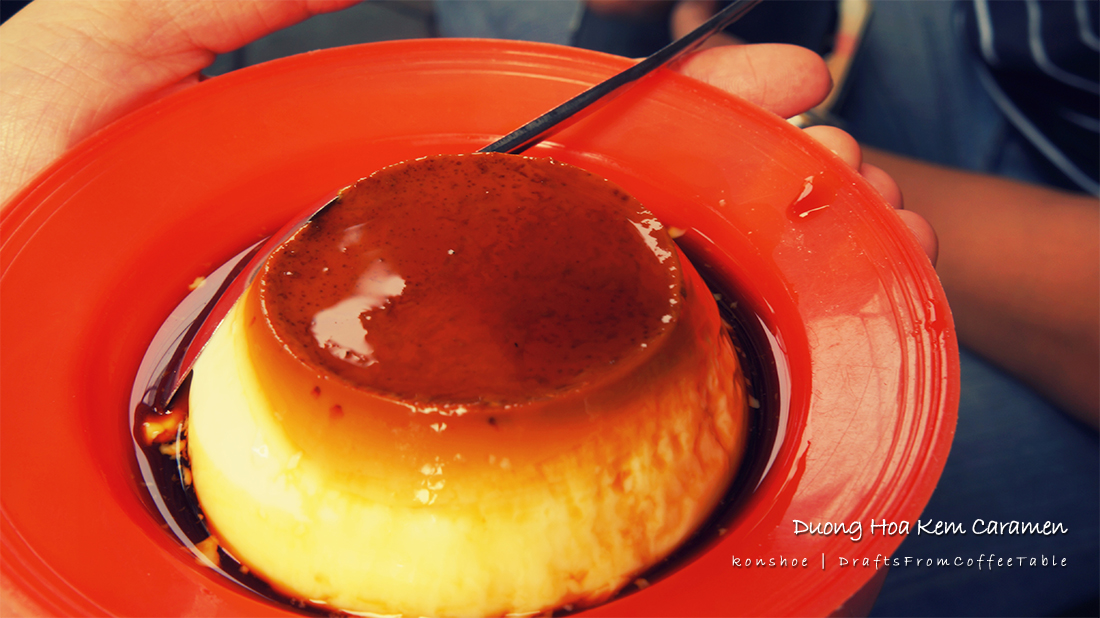 To be exact, the full name of the shop is Dương Hoa Sữa Chua Nếp Cẩm & Kem Caramen, but Kem Caramen is emphasized with much larger font, so all we could think of ordering was that. We were offered a plate of custard the color of the sun, with a coffee colored layer of topping, and bathed within a layer of tan caramel. One scoop of the luscious and bouncy soft custard was immediately followed by another scoop, then another, the familiar fragrance of caramel with its slight burnt smell flooding the senses. It was too tempting to stop. Resistance was simply futile.

Which comes to the question: what is kem caramen? A search online revealed that the exact term could be kem caramel instead, which is the Vietnamese version of crème caramel, also known as flan and caramel custard. Originating from France, it was brought into Vietnamese cuisine with French colonization. Crème caramel has a soft caramel top, as opposed to its cousin crème brûlée which is topped with hard caramel. More could be read from this Wikipedia entry - Crème caramel.

Dương Hoa Kem Caramen, being a dessert shop despite its emphasis on kem caramen, offered a variety of other items to sweeten your day. Various small cakes lined its transparent display, but we were drawn especially to another item of their display, a shrink wrapped piece the color of rainbow. We did not get the name of it, so I just christen it as rainbow jelly.

Despite addressing it as a jelly, it has a very solid texture, much like a hard jelly which could rival the solidness of our local kuih in Malaysia. We were enlightened to a fruity flavor with each bite, and chewing it in your mouth would further flood your senses. If you were able to indulge in more dessert after your share of kem caramen, then this would be our second recommendation. 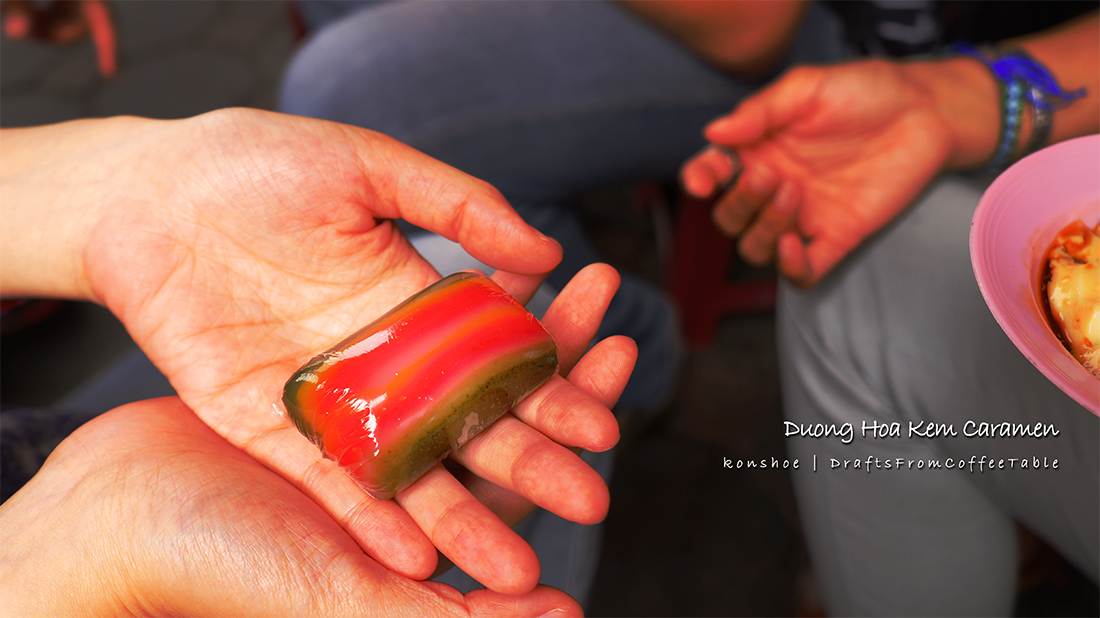 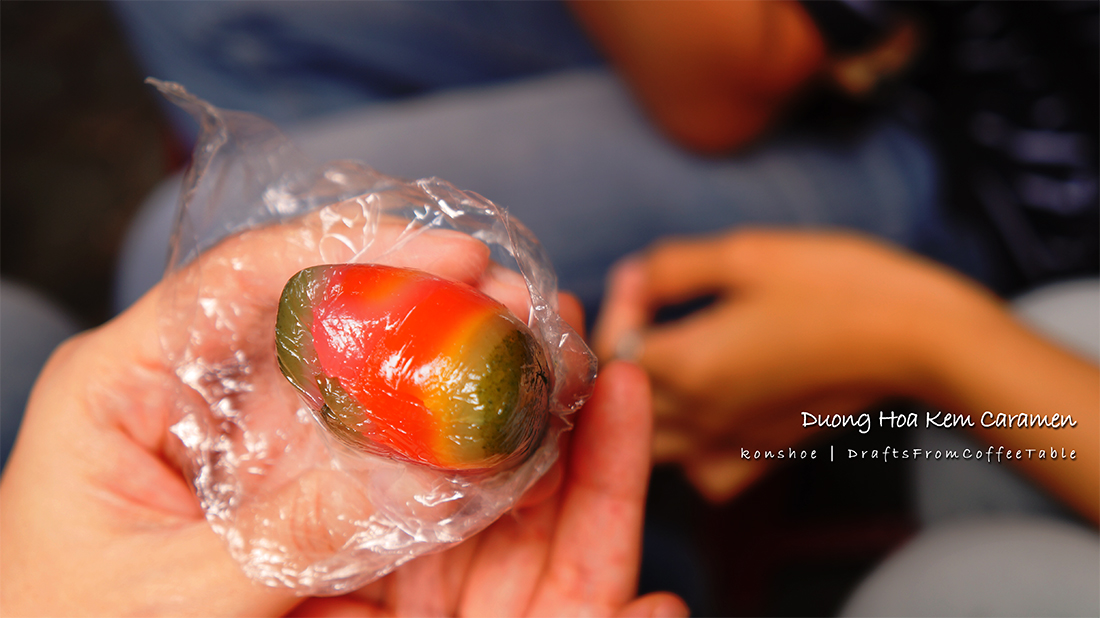 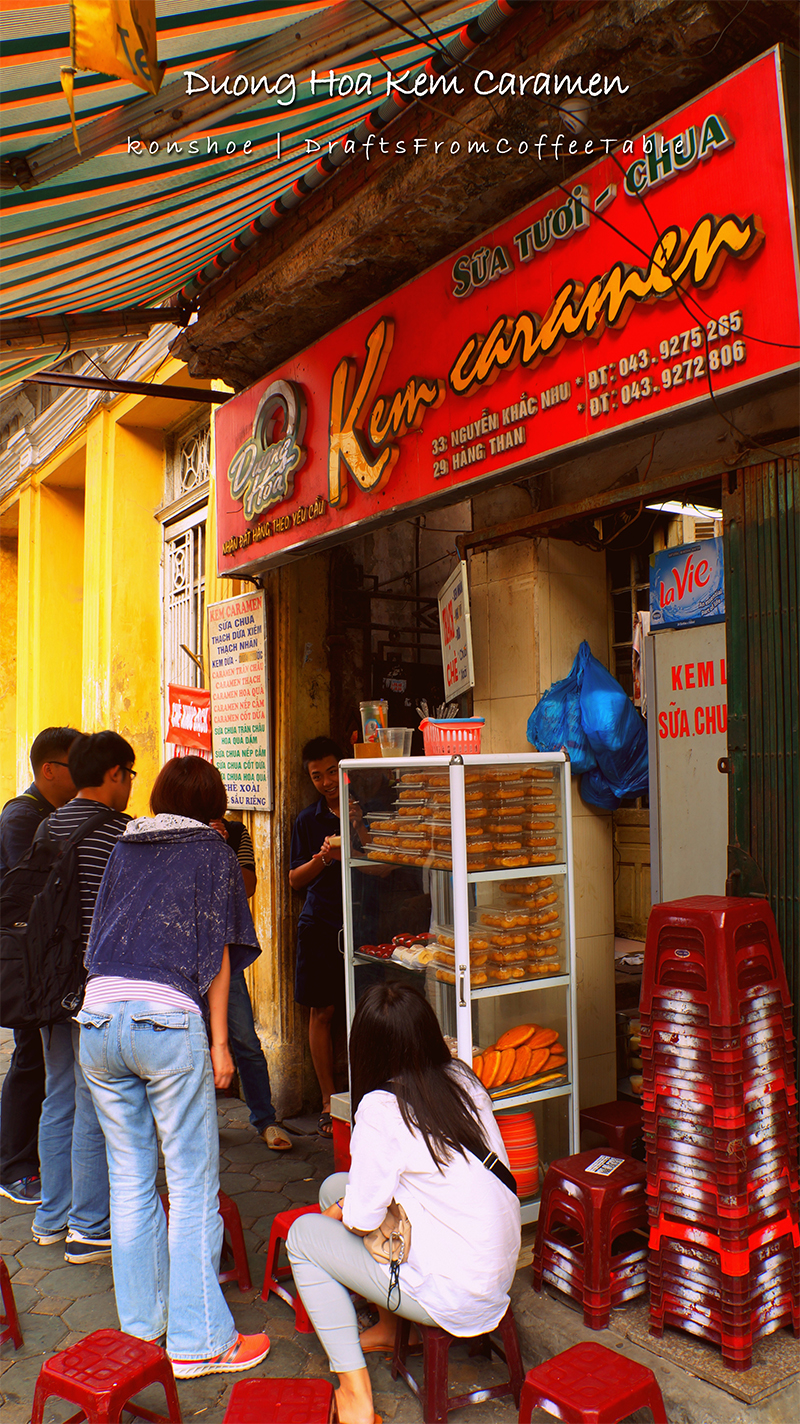 We arrived at the shop at a quiet hour, but the throng of lunch goers arrived after we left. And what a throng it was. It seemed that the shop was popular with the locals, with each motor riders leaving with dozens of custards. The locals just pull a stool and ordered something for each, and were immediately served by the owner with astonishing efficiency. For us, we were just happy that we did not need to fight with the locals for a spot to sample the delicious kem caramen, for it would just spoil everybody's mood, both ours and the locals who hungered for Duong Hoa's dessert.