Those familiar with the Tanjong Pagar area may notice a long queue at a corner of Orchid Hotel just near the Tanjong Pagar MRT station. A closer look would reveal a wildly popular ramen restaurant called Ramen Keisuke, which had received rave reviews online. To differentiate this branch with the few others under the same owner, this was suffixed with 'Tonkotsu King'.

I was recommended to this ramen restaurant after our outing at Department of Caffeine, a session which lasted from mid afternoon to late evening. Since Ramen Keisuke Tonkotsu King was right near Tanjong Pagar MRT station and we were heading that way, we decided that we could try our luck getting fed here. Although it received a mixed review from my gang, I personally like the dish for its broth's superior taste.


We arrived just slightly past 6 p.m. but the queue had already reached an incredible length, taking us close to 30 minutes before we were admitted. However Tonkontsu King clearly ooze Japanese efficiency by providing order forms upfront, allowing diners to place their orders before stepping into the store. By bringing us step by step through our choices, we chose the type of ramen, the toppings to go with, the flavor of the broth and the noodle's texture.


Upon our turn, we were ushered into a claustrophobic interior where space was a premium. It was obvious that the interior was meant just for dining. - tables and chairs were packed close to each other, and walking space was kept to a minimum, I wonder if the restaurants were this packed in japan as well.

Diners did not dwell longer than necessary in Ramen Keisuke, staying just long enough to finish their bowls. The waiters and waitresses were efficient as well, catering to less diners rather than handling a large crowd. The order prepared up front and received even before we were seated meant that we get to dig in just moments after we were assigned a spot.


I have to say that Ramen Keisuke's bowl of ramen was one of the best which I have tried before. The springy ramen had a solid texture which held its own until you chew it apart. The broth was cloudy with goodies, with chashu, chopped onions and black fungus adding tastes to my palate. The liquid was so tasty that every slurp of ramen was accompanied with a scoop of broth to savor the sweet and salty taste. Ramen Keisuke really earned its namesake with this broth. However diners should take note of its saltiness - too much could leave you really thirsty.

Of course, the tantalizing tamago was a heaven sent - its runny yolk core wrapped in a solid marinated egg white would make every diner squeal with delight on every bite, savoring the taste and experience as slow as they could. The chicken oil added to the taste and fragrance of the bowl, but with one problem - floating on the broth it was unnoticeable at first but upon reaching the end of the bowl, they started to get denser, diminishing the appeal of the ramen. Near the end it felt that we sipped more oil than broth.


One offering of Ramen Keisuke which I found novel and interesting is their bowl full of eggs. Each table was allocated a bowl full of hard boiled eggs, which came in brown and white variants, for your consumption. You could take as many as you like to be served with your ramen. However their shells were difficult to be peeled, leaving quite a mess when removing them, often prickling the egg white and leaving it with craters. Since these were free offerings not included in the bill, I guess I should not complain about it.

There is no doubt that Japanese food is usually inflated in Singapore and Malaysia but Ramen Keisuke is on the lower end of it. To get a big serving at close to SGD13 is rare indeed, especially since Keisuke Takeda, the chef owner of the restaurant bearing his name, is Ramen Champion of 2011 Tokyo Ramen Championships. And when I mentioned 'big serving', it really is that - it is not meant for light eaters to finish a full bowl without being too stuffed to walk.

Ramen Keisuke won me over with their taste, which is just above most Japanese restaurant offerings. I would choose this over most of the chain restaurants, but I would not queue another time just for the sake of it. I do hope they could improve the seating situation in their restaurant, because the queue is not because they are popular, but because there is nowhere enough place for diners. This could be tough though, unless they plan to move permanently to a shoplot with ample space. Maybe in my next visit I will look for the other few restaurants of Keisuke's and hope that the queue is not as long. 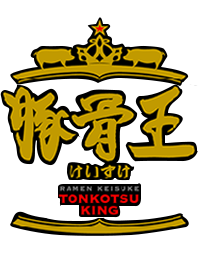