German: Residenz is German for residence, which in this case is a palace as it is a residence for the royalty

As I have come to learn in my visits, not all buildings in the UNESCO Heritage List are beautiful. They are there because of their value, not their appeal. Yet there are definitely some which are a sight to see, one which travellers would not miss for whatever reason. With Würzburg Residenz I have come to gain another insight in my travels - sometimes buildings appeal more inside than outside.

It is unfortunate that no photographs are allowed within the palace building, so I have to resort to words to describe the feelings of my visit, a task that is monumental given that the beauty I beheld was one where words failed me.


As it was for Stift Haug (click the link to read my previous post on this Baroque church), Würzburg Residenz did not survive the ravages of World War II unharmed. What may seem like a well preserved palace was in fact a reconstruction well done.

Situated on an expanse devoid of any building except for motionless cars, the yard to the palace's front immediately direct the focus of any onlookers to the palace building. Upon exiting the road leading to it, I could feel the grandeur meant to impress upon visitors in the past. Even under the overcast sky, the golden glow of Würzburg Residenz was remarkable, its stature as a palace unmistakable.

The similarity of the palace to Palace of Versailles in Paris was rather obvious. Its main central block was flanked by two wings extending forward, forming a three sided courtyard to its front. This would be the distinctive Cour d'honneur architecture, an architectural term for the three-sided courtyard, one which immediately reminded me of its Paris counterpart. 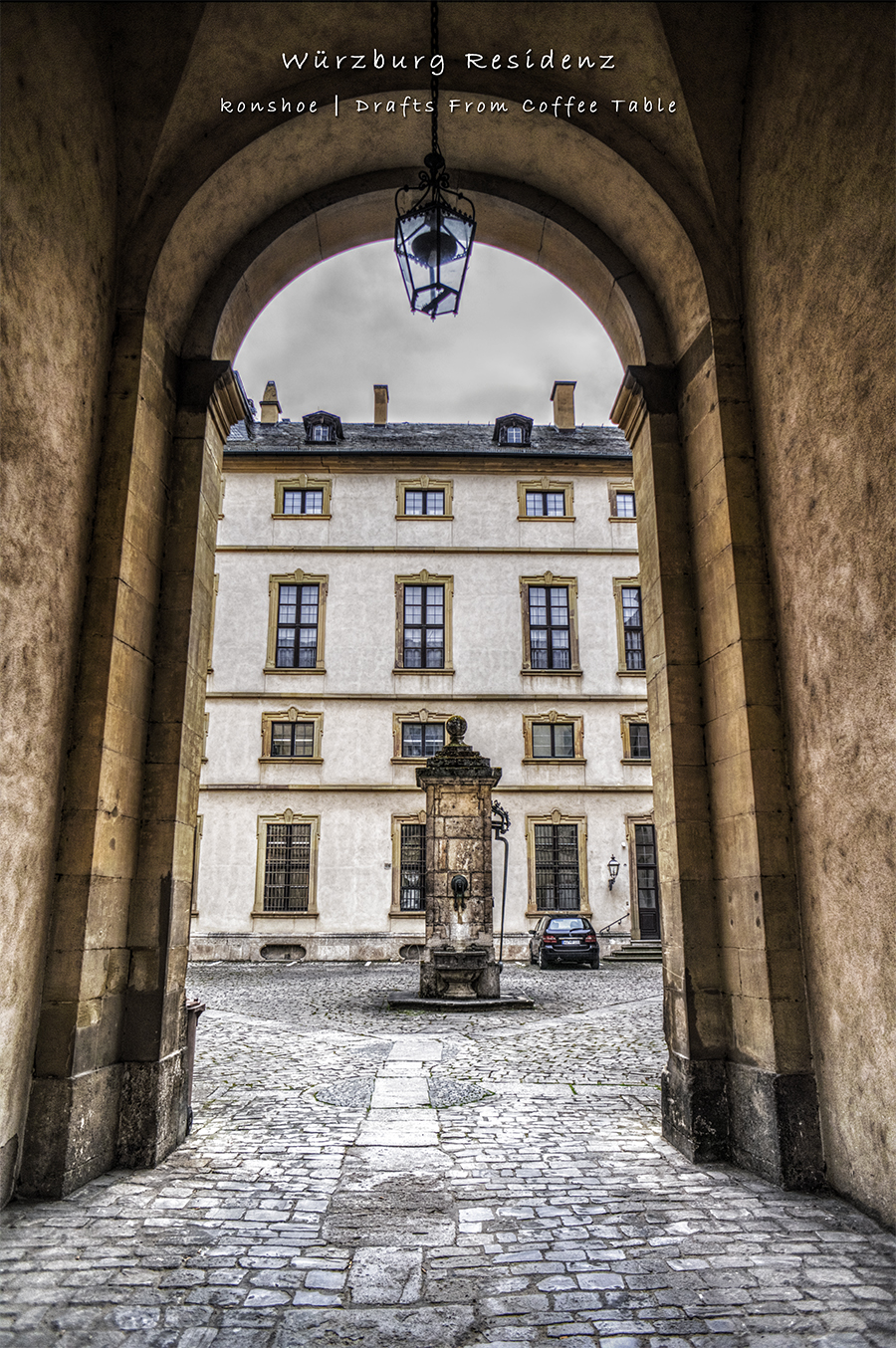 So how did this palace began its life, and from where did it get its beauty and fame? As it was, the Prince-Bishops of Würzburg stayed originally in Fortress Marienburg, an ancient castle across the river and viewing down from a hill. In the 18th century, Johann Philipp Franz von Schönborn (1719–1724) felt the palace he moved into, a small one built in 1701 - 1704, did not suit his status. And so he began building a grand one in 1720, which became the Würzburg Residenz. But that was not how it became the way I see today. Construction was halted and restarted when the palace changed hands throughout the 18th century. Even though it was completed in 1744, its interior was still a work in progress until final touches ended in 1753.

I am not of architectural background, but my interest in it, especially in a historical setting prodded me to read more about what I saw within Würzburg Residenz. One of the remarkable thing about this Baroque palace was the fact that it incorporated the architectural styles from various countries. Contributing to the construction was Johann Lukas von Hildebrandt and Maximilian von Welsch in Southern German and Austrian style, Robert de Cotte and Germain Boffrand in the French style, Giovanni Battista Tiepolo of Venice in interior while Balthasar Neumann acted as its principal architect.

Neumann's task was made monumental in trying to harmonize these different styles within the same building, his success earning him fame for eternity. His most marvellous accomplishment was the stone vault over the main staircase, which survived the air raid during World War II, securing part of the palace from certain demise.

Entering past the ticket counter, my sight was immediately guided to the main staircase (Treppenhaus), one which would fit any royalty movie perfectly. It was wide and grand, truly fit for a king. Climbing up it revealed even more awesome view of the frescoes above, vivid and lifelike. Combining two dimensional fresco painting with three dimensional stuccoes, the work of Giovanni Battista Tiepolo was just a sight for sore eyes. The more I stared the more I was convinced that the characters of his story could just pop out any time.

Another marvellous room lied before the staircase after the climb, in a first floor room dubbed The White Hall (Weisser Saal). The pristine white room was the showcase of Antonnio Bossi's work as a stuccoist, where the ceiling was adorned with curling work of arts. I found the swirls a little unnerving however, comparing them to tentacles of white. As opposed to the alabaster room, one other memorable room was the Garden Hall (Gartensaal). This was the other place apart from the staircase where everyone entered and just craned their necks where Tiepolo continued to focus our eyes heavenward with his work.

Various owners renovated and decorated the interior to suit their personality and favourite. One of the most famous room is the Green Lacquered Room, a whole room painted with a deep green that contain a sheen reminiscent of metallic paint yet not as shiny. The luminous green was created by applying the paint on silver ground, allowing an unmatched colour depth. It was one of the memorable rooms amongst others, striking me as unique and one of its kind.


I spent about 2 hours trying to get everything branded against my memory, and it was well worth the time. What I missed was one of its most previous halls, the Court Chapel (Hofkirche), where a mass was in progress at that time. It could have been one of the most heartache misses, but I must move on to explore the other part of Würzburg Residenz, the equally impressive Court Gardens behind it. And the good news is that it is free. Unfortunately it was rather drab with the winter spell.

Environment:         A UNESCO Heritage List building in the old town area
Suitable for:            History buffs, UNESCO hunters and art appreciators
Visit worthiness:   9.5/10 (make sure you plan as much time within as possible as no photos are allowed)