This is not a church high on most list for a visit to Würzburg, yet it was the first I stumbled onto while on my way to Würzburg Residenz, and its beauty mesmerized me. From afar the dome top of the church was unmistakable, a remarkably beautiful Baroque structure standing tall amongst the modern dwellings and shop houses.

Its beauty would deceive gawker from the scars it faced in the past. The bombing of Würzburg during World War 2 had left much of the city in ruins, destroying many historically rich artefacts and structures, including the rich Baroque interior of the church. Renovation of Stift Haug's interior only completed in 2005, the scars of history existing only in dated photos and the minds of the locals.

Even before entering the church, one could see how Stift Haug was hailed as one of Würzburg's important architecture. Ornate sculptures of saints and angels stood in alcoves ringing the holy place, overlooking passer-bys and protecting the church in their silent way. Built by famed Italian architect Antonio Petrini, it became the first Baroque church not only in the city but also in the whole region of Franconia. But the church's history extended far beyond the Baroque era of 16th century.

According to online resources, Stift Haug originally existed as the Church of St John, dedicated to John the Baptist and John the Evagelist. It was founded in 1000 by Bishop Henry I of Würzburg and was originally situated near the current site of the Würzburg train station, making it a millennial old building if it survived in its original state. It underwent several life-changing event, being looted and destroyed in Thirty Years War and restored again as a Romanesque building, only to be demolished again. 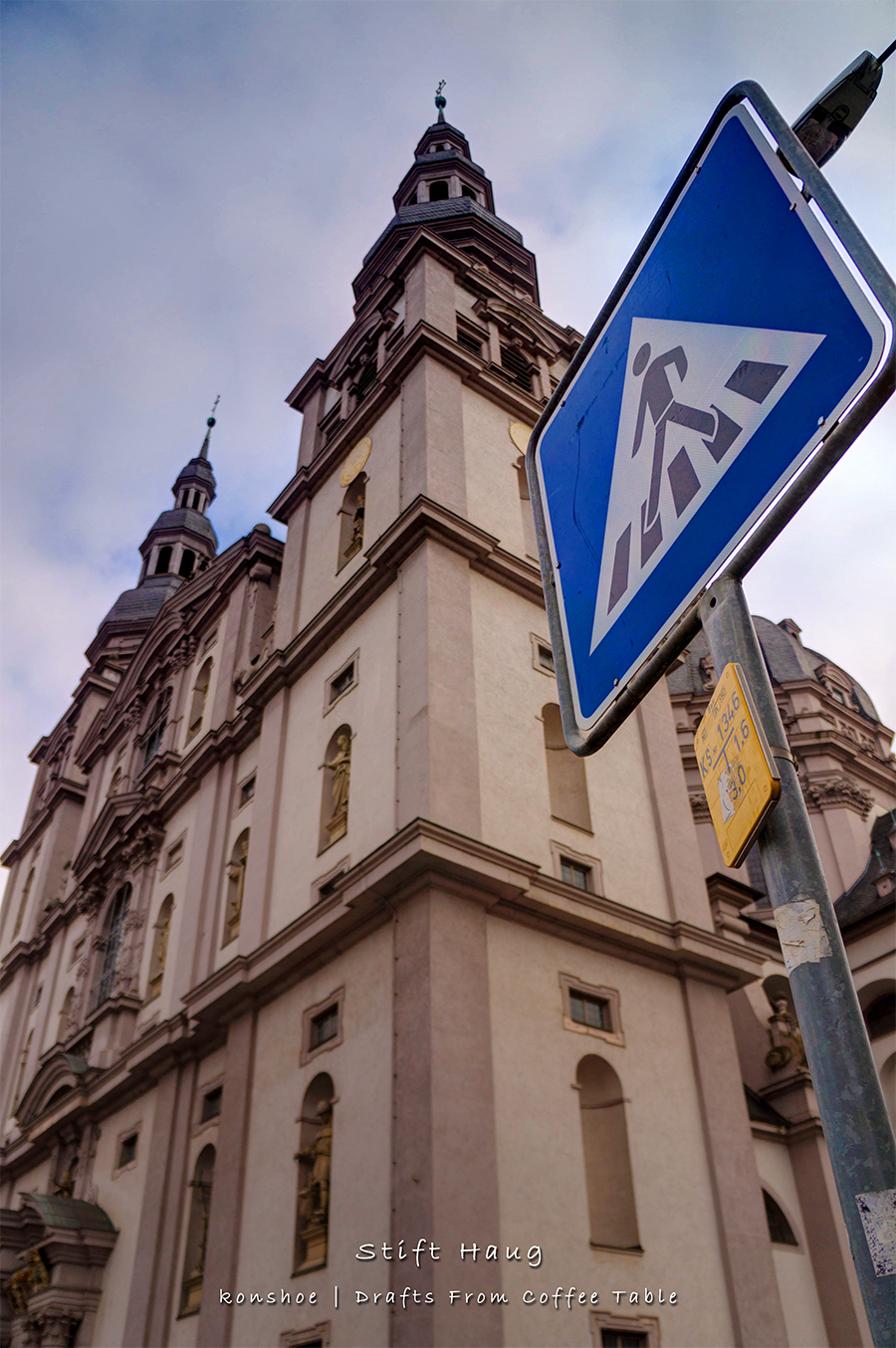 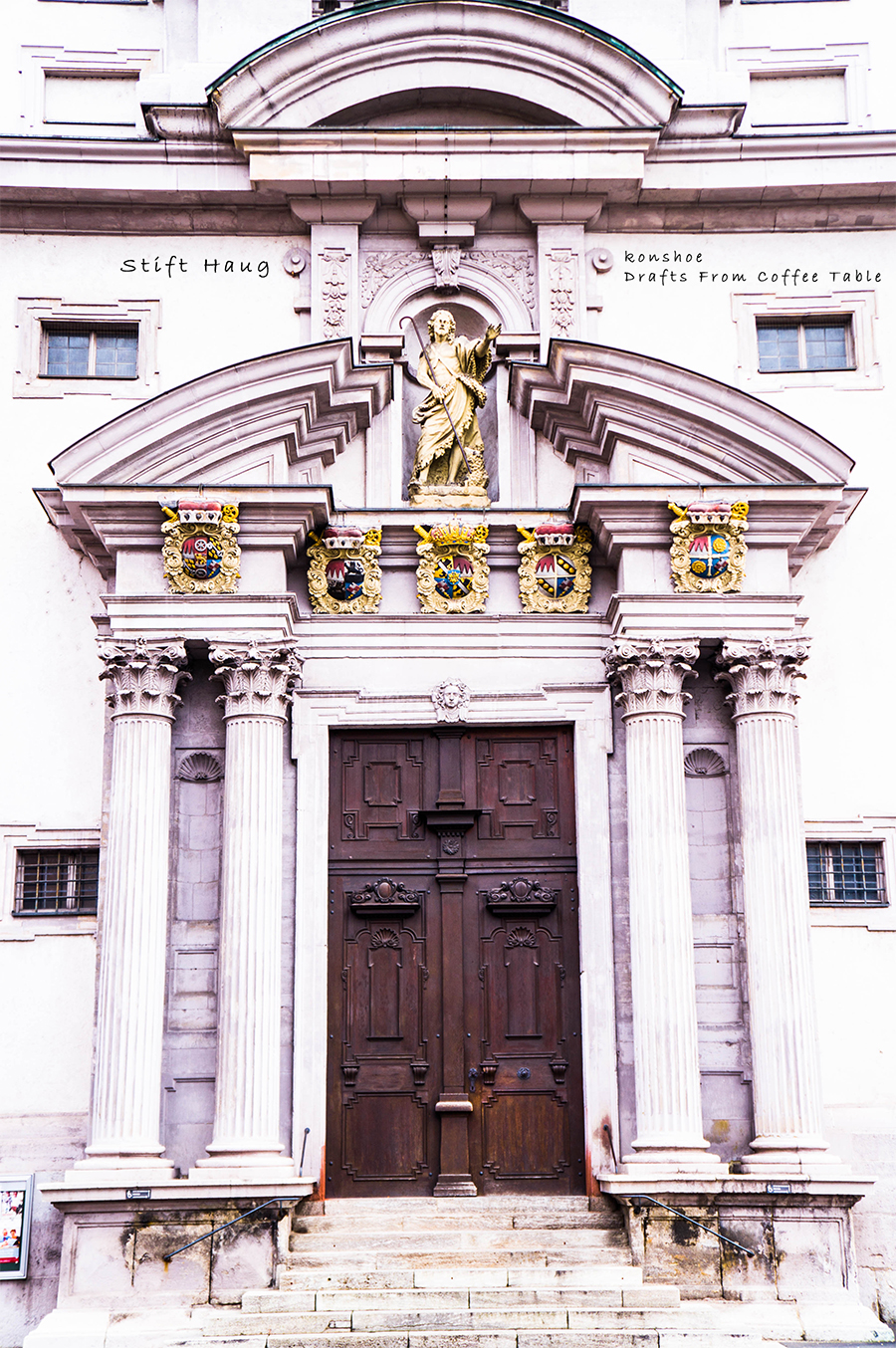 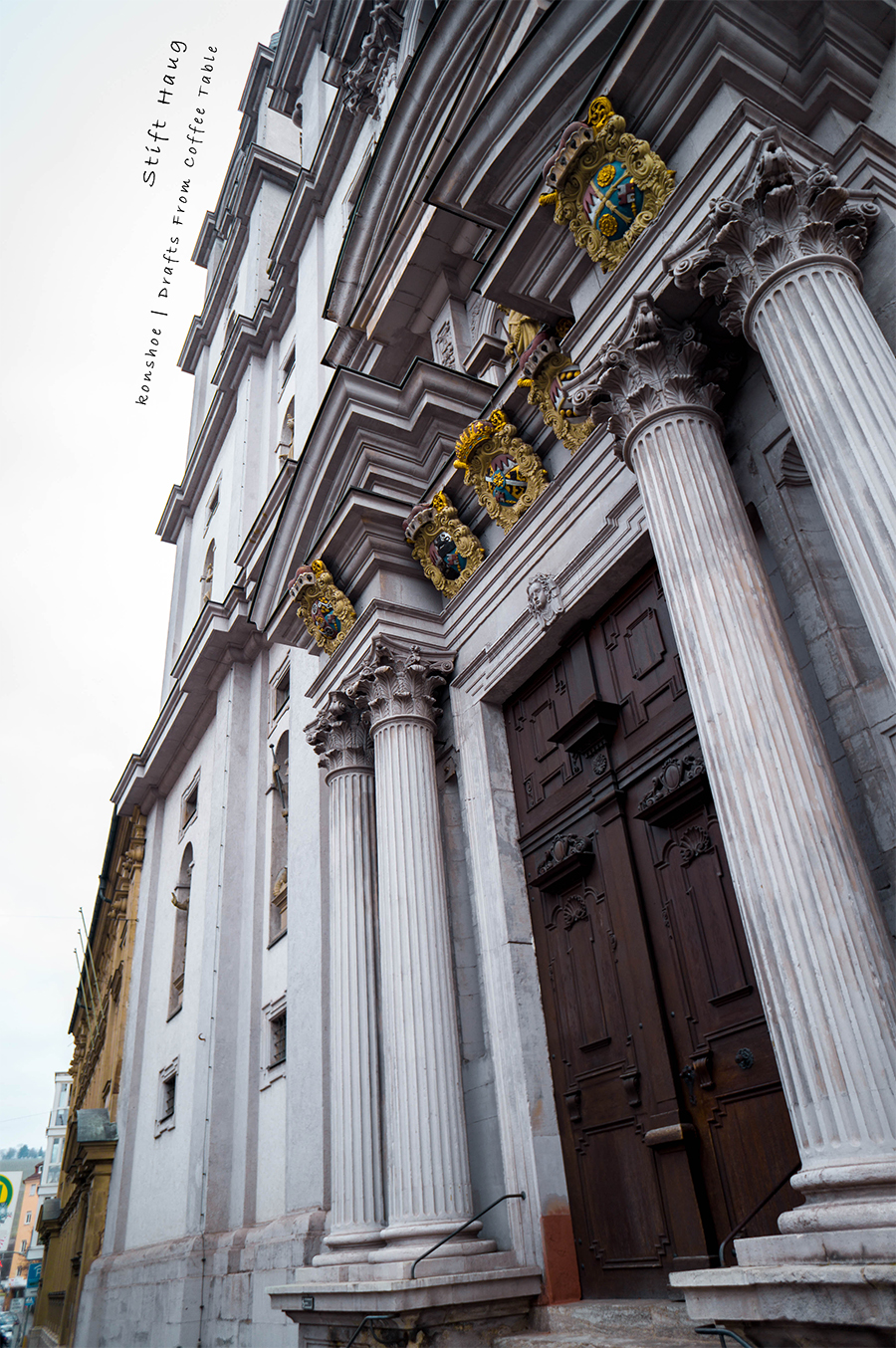 The interior of Stift Haug reminded me of purity with its whitewash. A rather abstract sculpture of the crucifixion was an indication that what I saw within was no longer the original building. A search through the Internet later revealed that my suspicion was right - this was a bronze cross by Dietrich Klinge, a German sculpture and artist.

The altarpiece however proved to be a more medieval work of art - Jacopo Tintoretto's Crucifixion, a work that was done in the 15th century. Protected in a gilded frame, the painting was one of the most attention grabbing item in Stift Haug. A dark and moody scene captured the atmosphere surrounding the event of Christ's crucifixion, and although the altar was sealed from entering, the painting was large enough that even at a distance, I could work out the details easily. 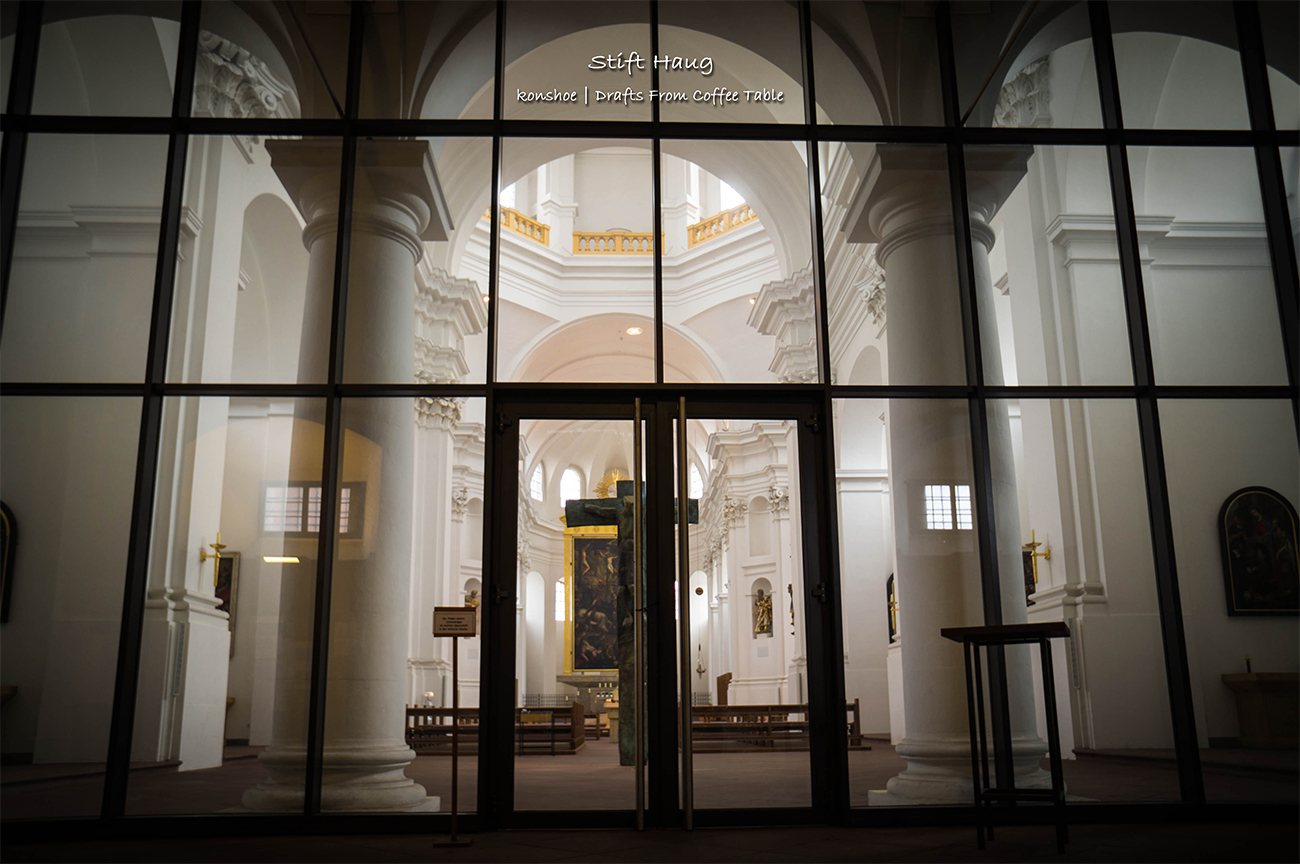 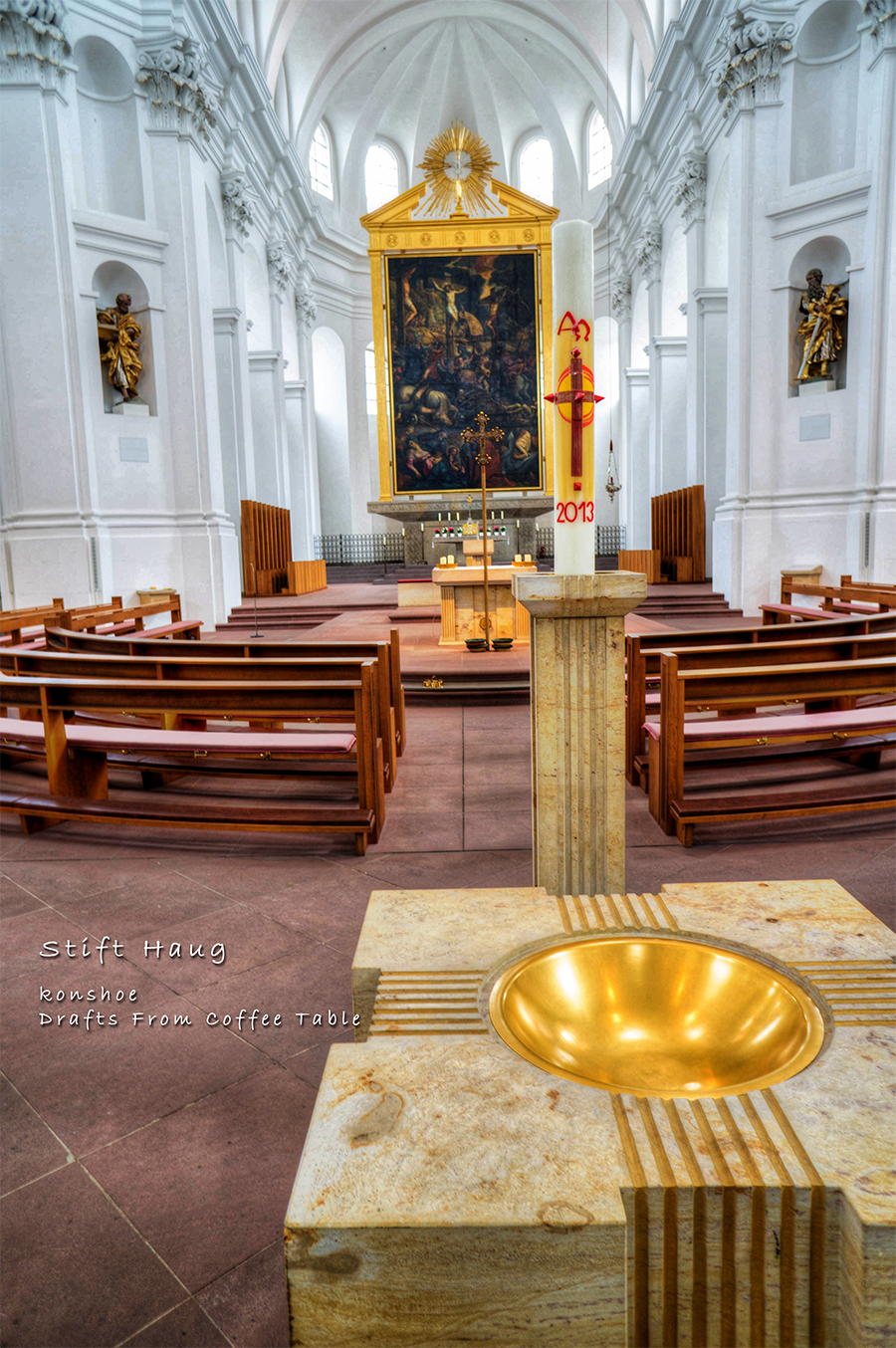 Nice as Stift Haug was, it was but a stop in my travel within Würzburg. So I bade farewell to the fatherly priest who greeted me friendly when I entered, and proceeded to my next stop. I left the sculpted saints and pure white halls of Stift Haug and walked towards my real target of Würzburg, the UNESCO Heritage Listed building of Würzburg Residenz.


Environment:         A Baroque church, one of the first Baroque building in the region
Suitable for:            Marvel at the Baroque architecture
Visit worthiness:   6/10 (skip it if you have less time)