When I was planning our trip to Hanoi, I frequently encountered the comment that one of the city's highlight was to attend a cultural show in Thang Long Water Puppet Theater. We entered the theater with great anticipation to be enthralled, so maybe our expectation proved to be the reason we felt disappointed upon the end of the show.

Thang Long Water Puppet Theater proved to be an easy reach from Hoan Kiem Lake once we got over our phobia and crossed the relentless traffic to the other side of the road. As if in fear of not being noticed among the jumble of buildings, the narrow profile of the building's front was decorated with a column of puppets, and come dusk they were all lit up eerily, reminding me of killer dolls in horror movies. 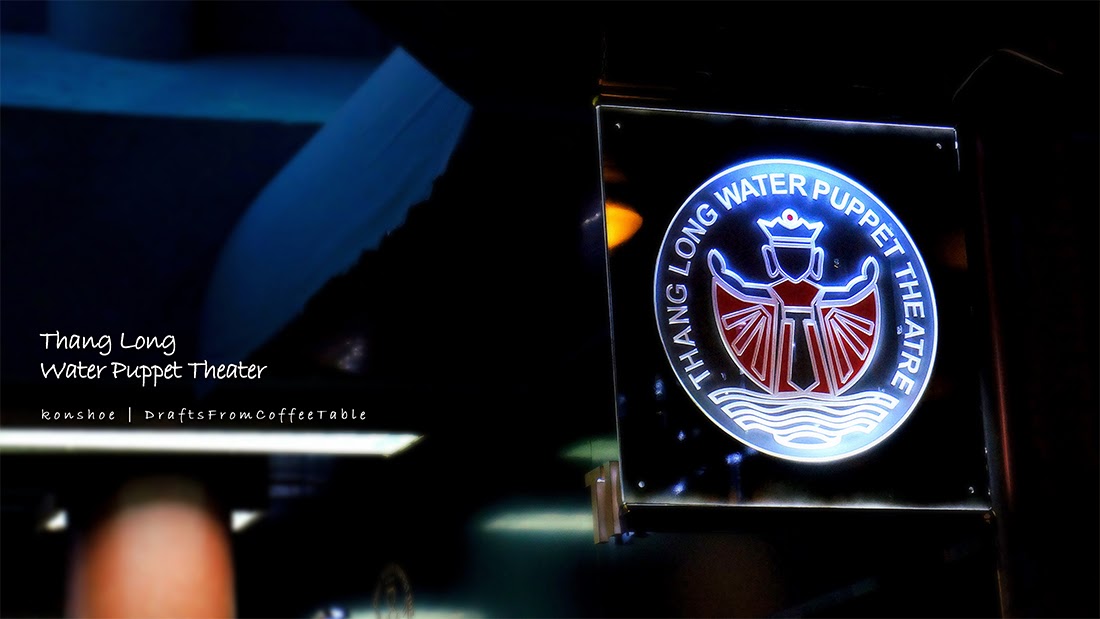 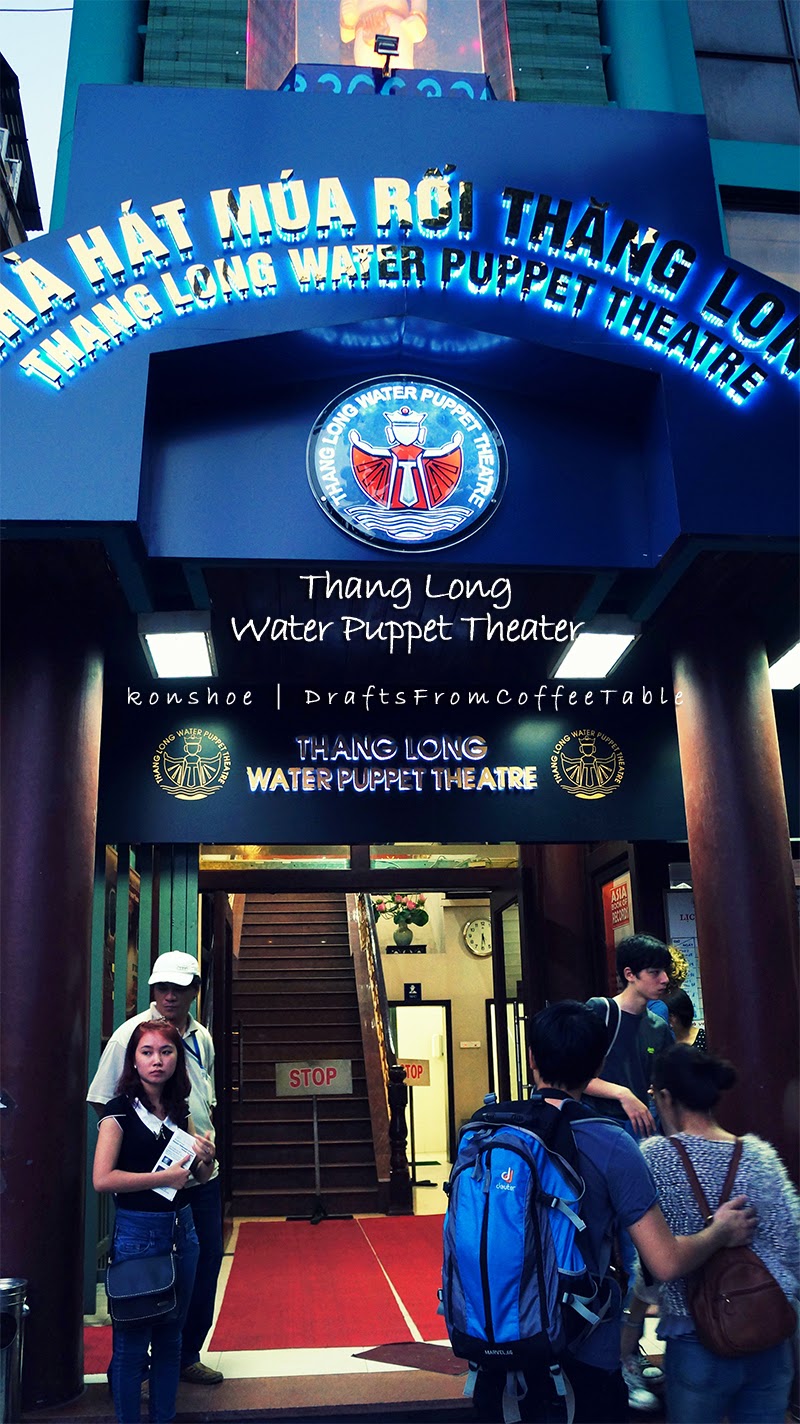 Queuing for a ticket proved not too much of hassle and we managed to have an eye-opening experience as well. Most of those in queue were either foreign tourists like us or local tour guides, with a few Vietnamese tourists interspersed between. So imagine our shock when some young Western tourists whom we suspected were backpackers just barged to the front and ask for a ticket. So much for the assumption that westerners were more polite and respectful. Even the local tour guide queuing behind us had a dark look on him and we could almost see him fuming. Maybe he was upset because even a local as he did not cut queue as the western did.

To buy the tickets, we only need to tell the counter the showtime and the number of tickets, as well as choosing whether to take a type 1 or type 2 ticket (each at VND100,000 and VND60,000 repsectively, about RM16 and RM9.60), the former representing the front rows although it was conveniently missing any information as to how many rows to the front were listed within type 1.

After we killed time in Sketch Cafe, we proceeded to enter the theater minutes before showtime where we faced our first disappointment. Although our ticket were meant for front row, they were fully occupied by a tour group, and we were left to simply find any unoccupied spot to be seated. We were fortunate to still get a barely obstructed view to the stage although the knowledge that we need not buy a more expensive ticket left us bristling. Still the show must go on.

A sign at the entrance informed that an additional fee was required if viewers wished to bring in camera (VND20,000, about RM3.20) or video camera (VND60,000, about RM9.60), payable separately to the ticket checking employees at the entrance. Being an honest visitor, I paid that amount only to realize that you could still film it or photograph it without anybody batting an eye. With my medium sized bag, I could just hide my camera inside and take it out after I was past the checking agents, saving myself the amount. This became the second reason for me to be upset, the price paid for honesty. 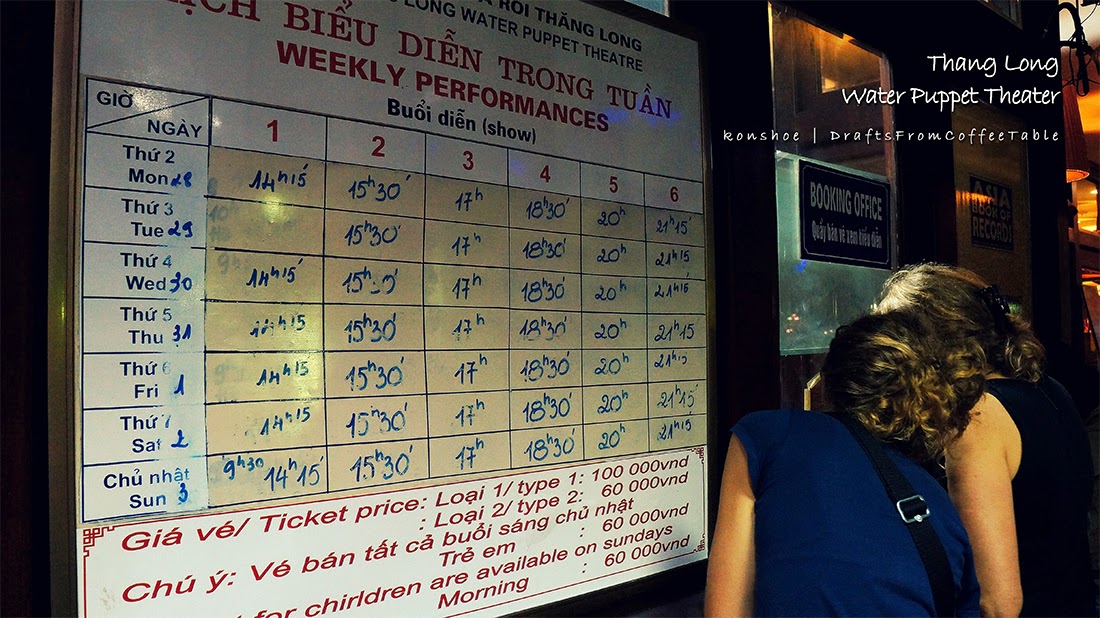 We noted how similar the theater was to a cinema, albeit a little worn down and a water filled stage to the front in the place of the silver screen. Various folding chairs leaned neatly against the side aisle, being used by some from the back to be seated closer to the front, causing difficult access along the aisle. This disregard of the seating numbers and flexibility in creating a seat out of nothing essentially made the tiering of ticket prices unnecessary. However the seats were comfortably cushioned and wide enough that one felt rested on it, without the torturous cramp in the legs which some seats could cause. This would be crucial as the show ran close to an hour.

As the stage dimmed for the show, the singers and instrument players were announced, appearing on a side of the stage. Although the introduction was multilingual, the rest of the show was sung and narrated in Vietnamese. We were uncomfortable with the narrator's piercingly high pitch but we still enjoyed the overall show. 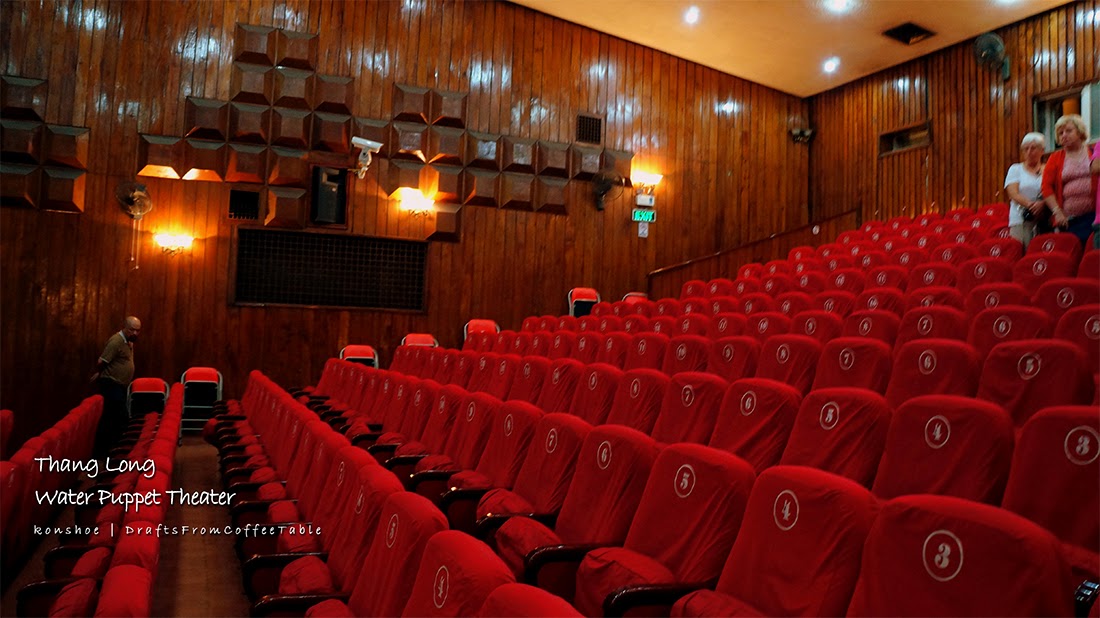 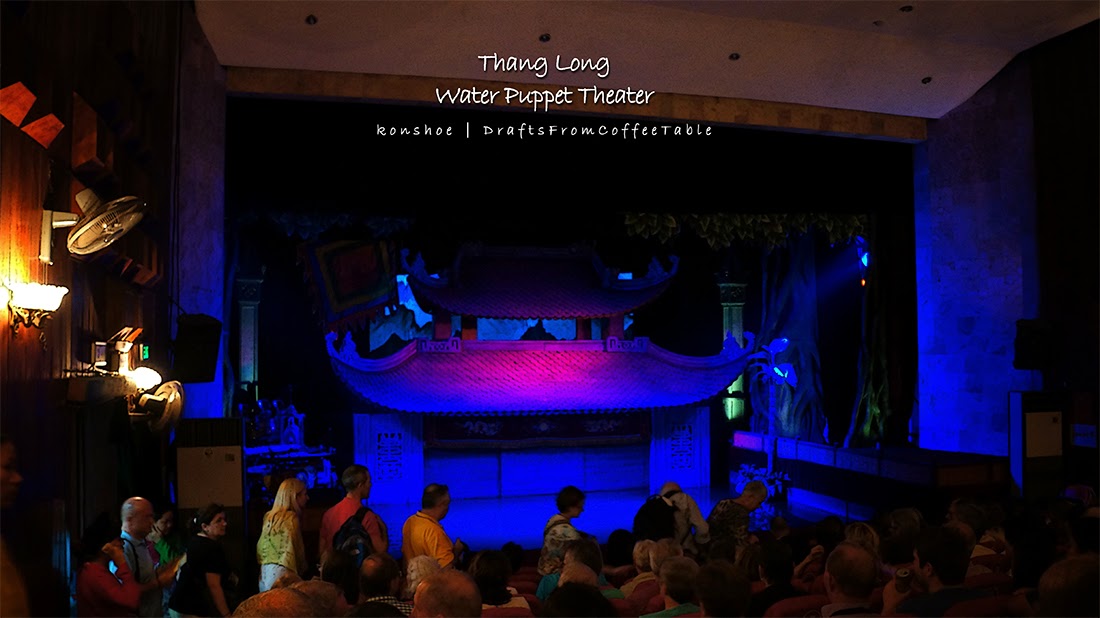 We did not understand Vietnamese over the night, so we were understandably confused with the story but the element of the play allow most viewers who had a basic grasp of Hanoian lore and Vietnamese life would appreciate it. Leaflets in English were available without charge at the entrance to the theater hall (after the building's entrance was another lobby), which proved to be handy to understand the play. So it is highly advisable for one to read it up or to understand more about Hanoian lore before attending the play, for one would feel understandably confused and ultimately bored.

A word of caution though - Thang Long Water Puppet Theater offers a cultural play, a medieval one at that, which showcases a unique tradition that is endangered in this modern era. It would be inappropriate to compare this to a cinematic show where the main element is to follow the modern trend and entertain the mass. If the visitor was not prepared to appreciate such show, then being led to enter this theater purely because all guidebooks and websites listed it as 'must-see' would be a mistake, one which I believed some impatient visitors felt when they left the play after a few acts. 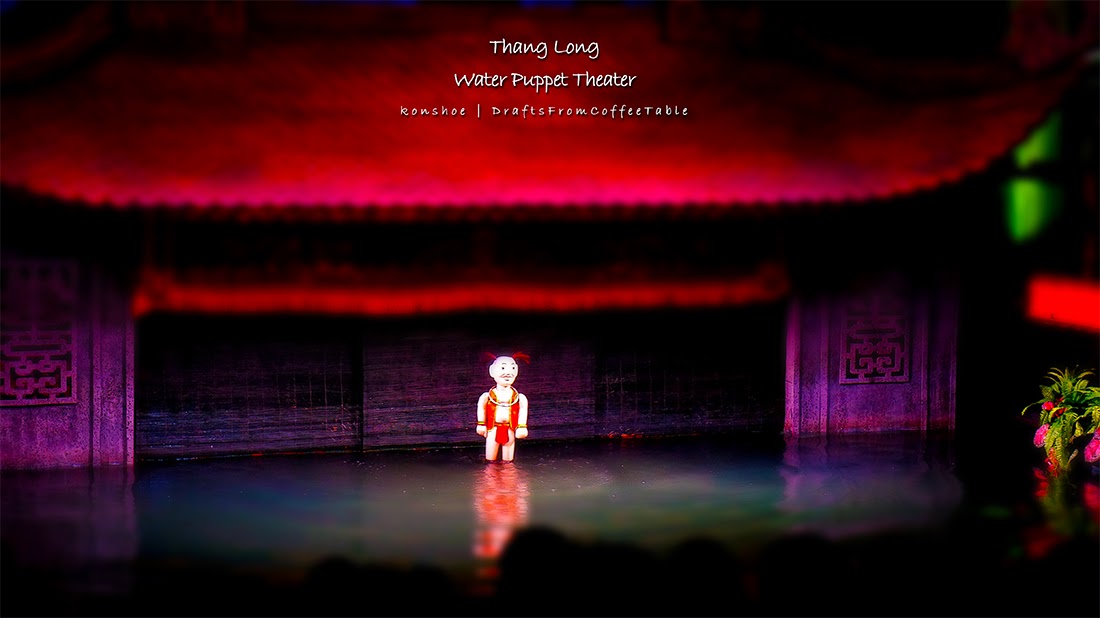 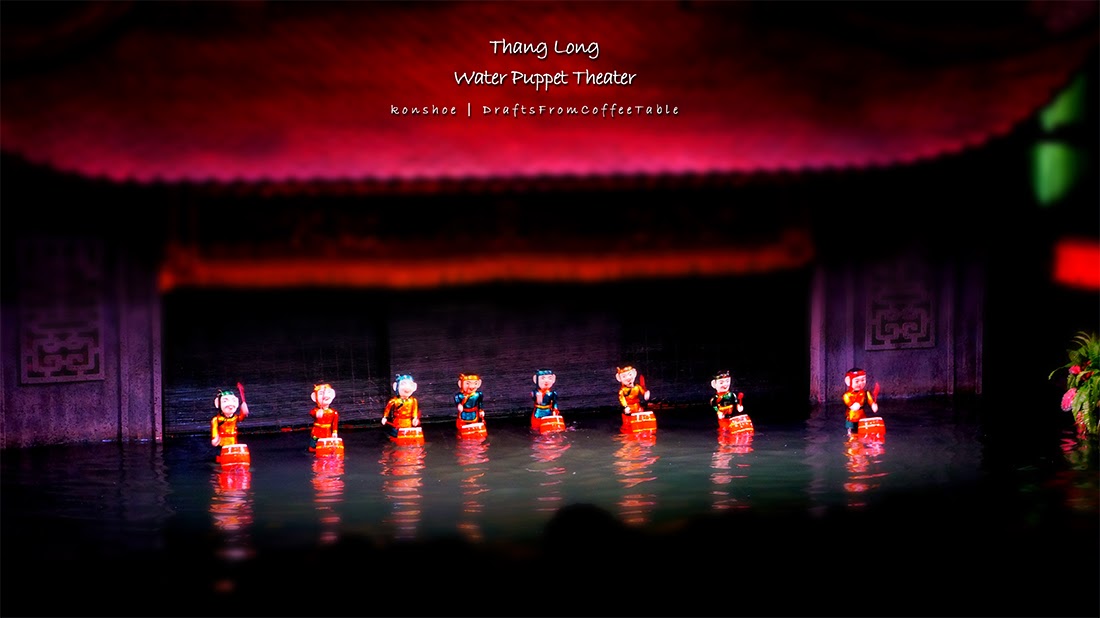 Water puppetry is not unique to North Vietnam but such play no longer exist in a consistent manner elsewhere. Thang Long Water Puppet Theater is one of Vietnam's 3 foremost company to run the performance on the international stage, sharing it in international performances and cultural exchanges with other nations. It was uncovered that its origin may have been earlier than the earliest record of 11th century, stemming from the villages of Red River Delta in northern Vietnam region.

The emergence of water puppetry is not solely for the entertainment of the people - it also served to sooth the spirits which Vietnamese believed resided in everything. With rice being the main staple and flooded paddy fields abundant, the resourceful Vietnamese of the past utilized materials from their surroundings to create this form of entertainment. Flooded paddy fields after harvest were used as stage, with pagodas built upon them to hide the puppeteers, and a play was performed to sooth the spirits and to entertain the mass. 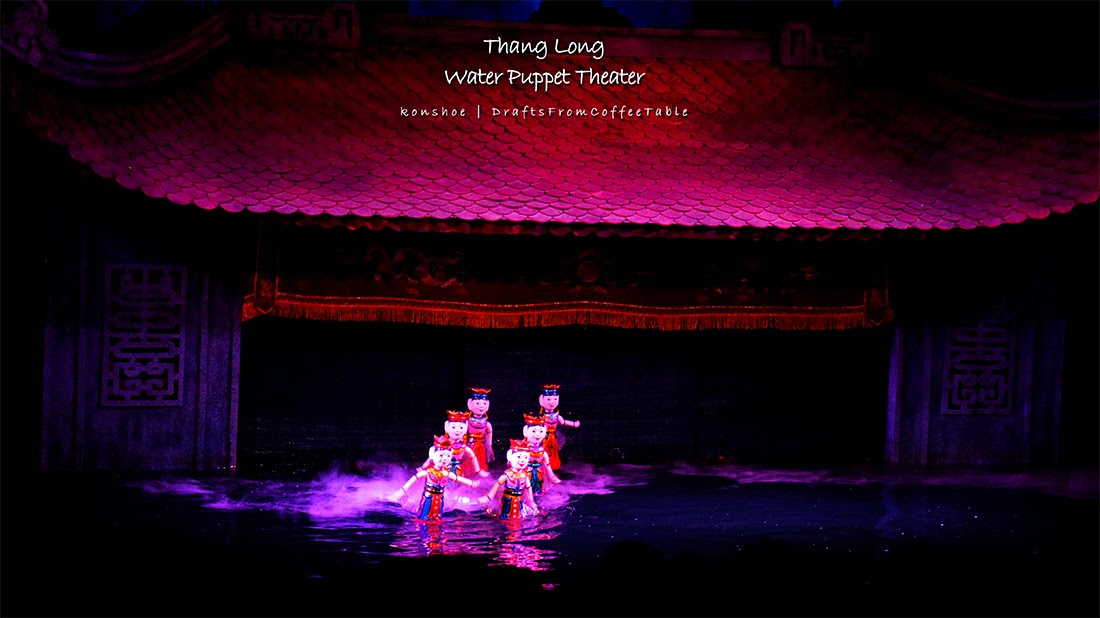 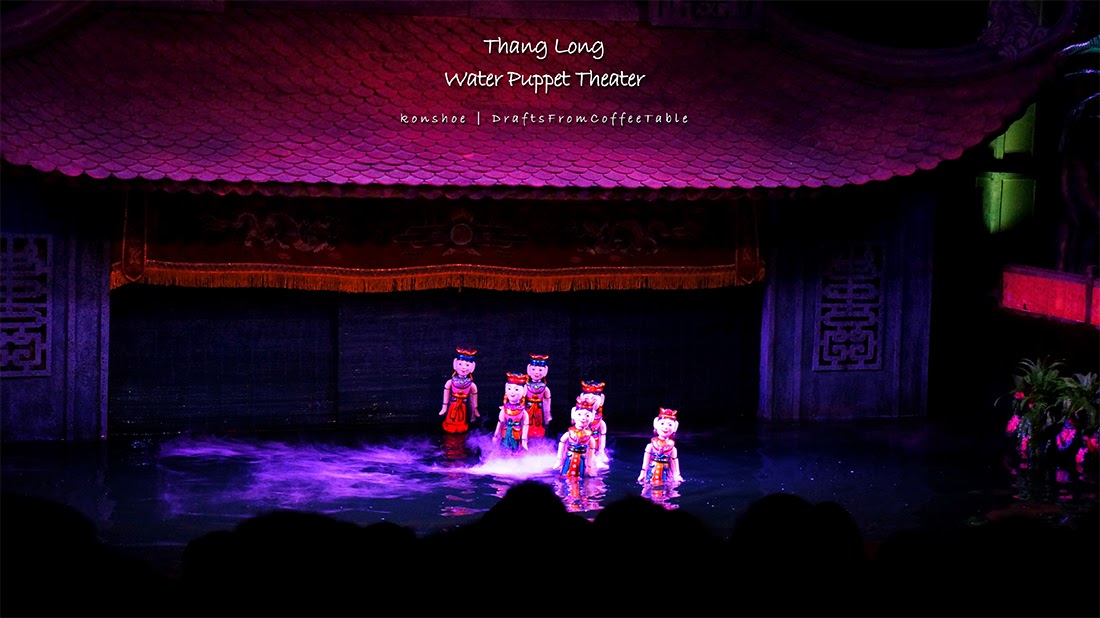 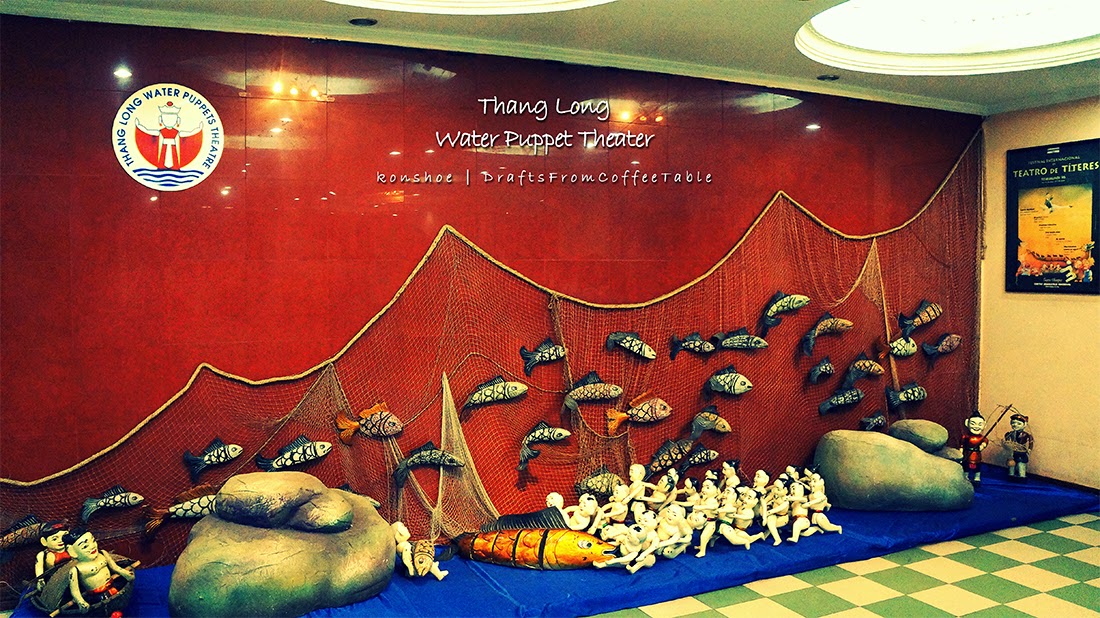 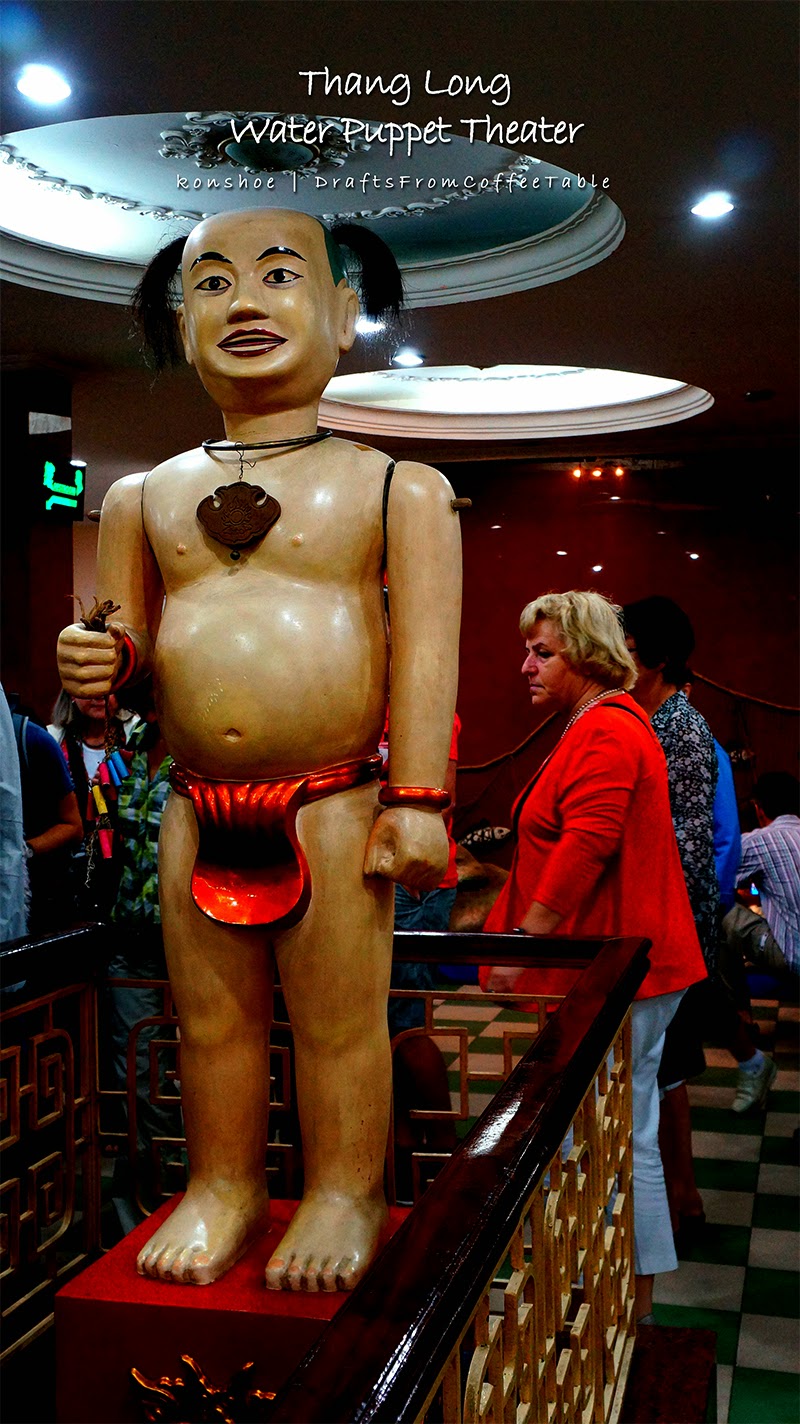 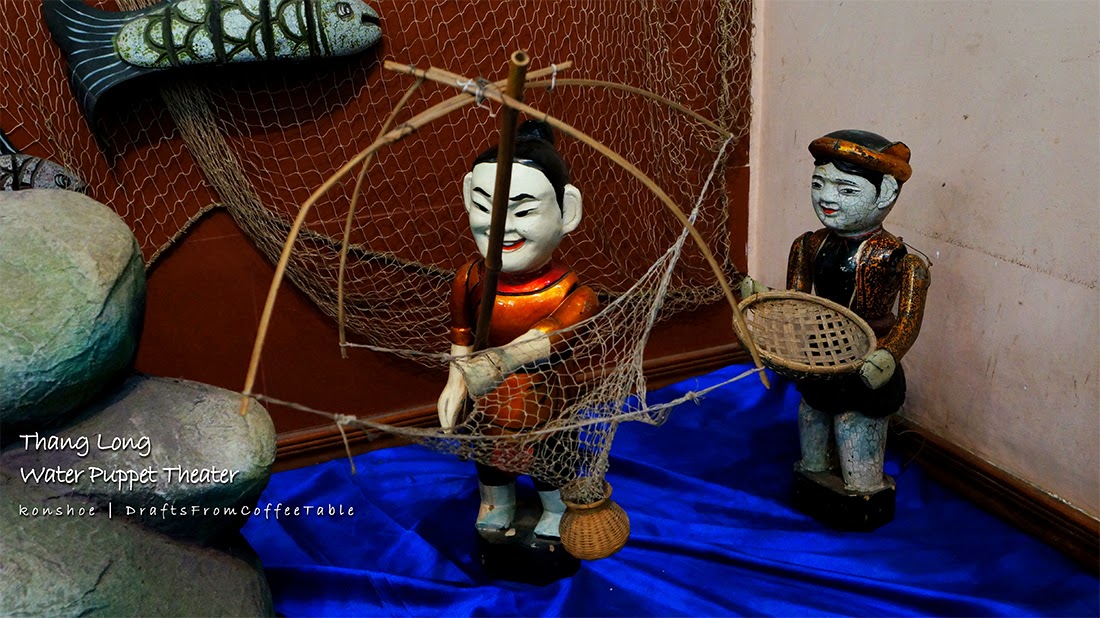 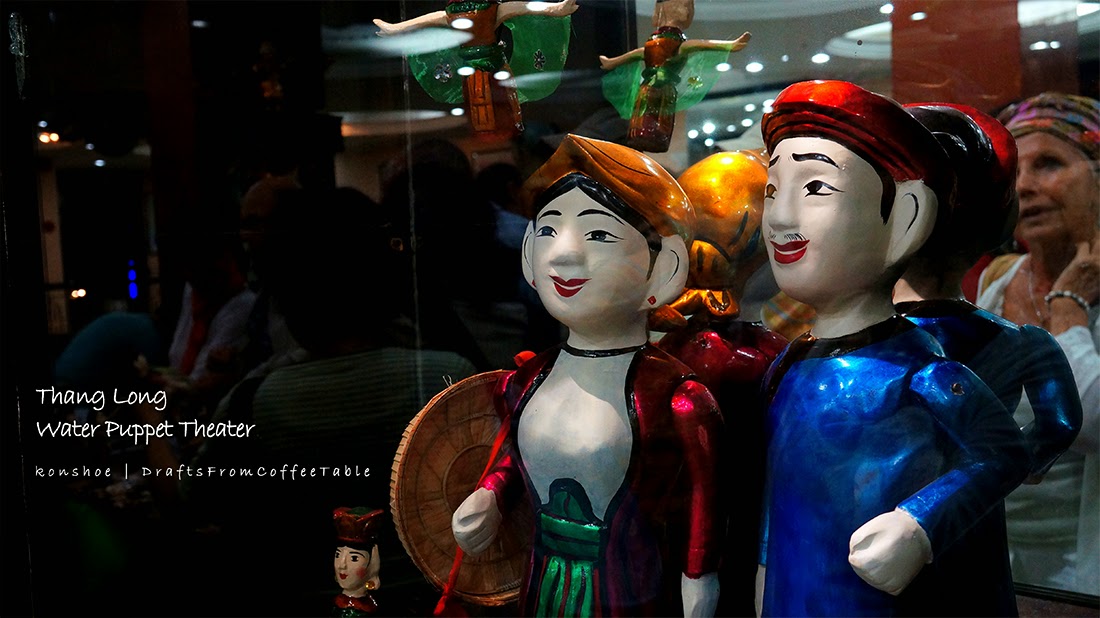 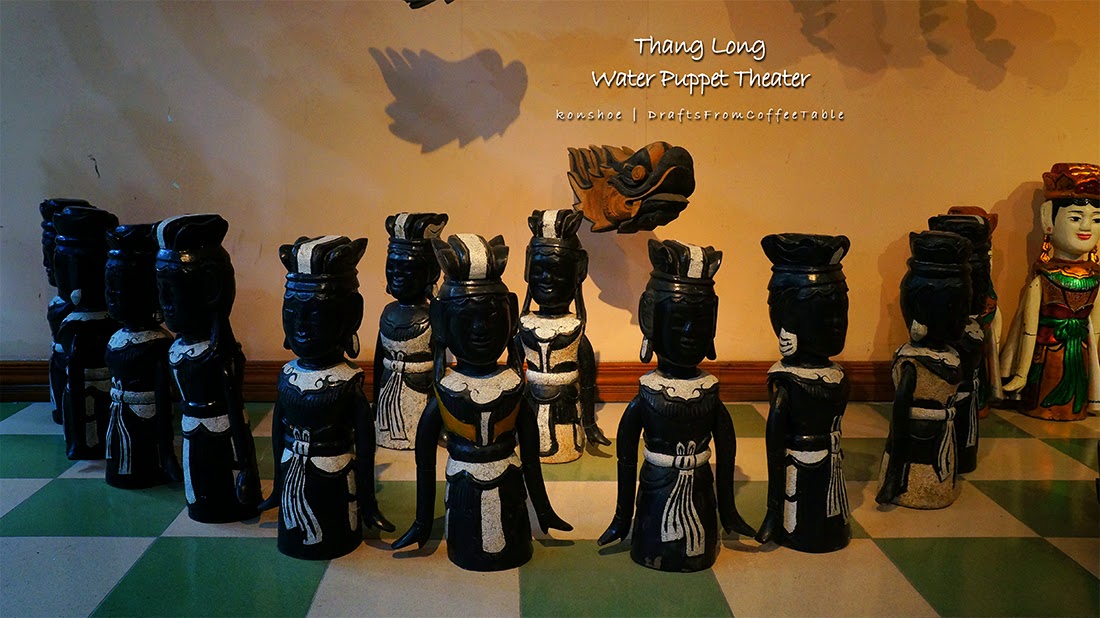 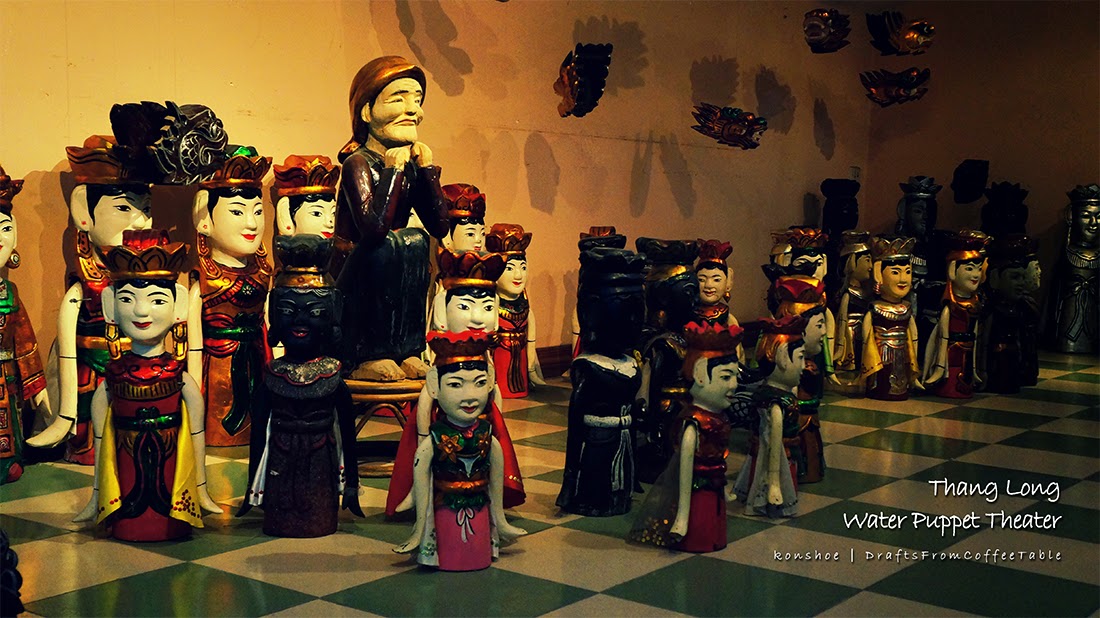 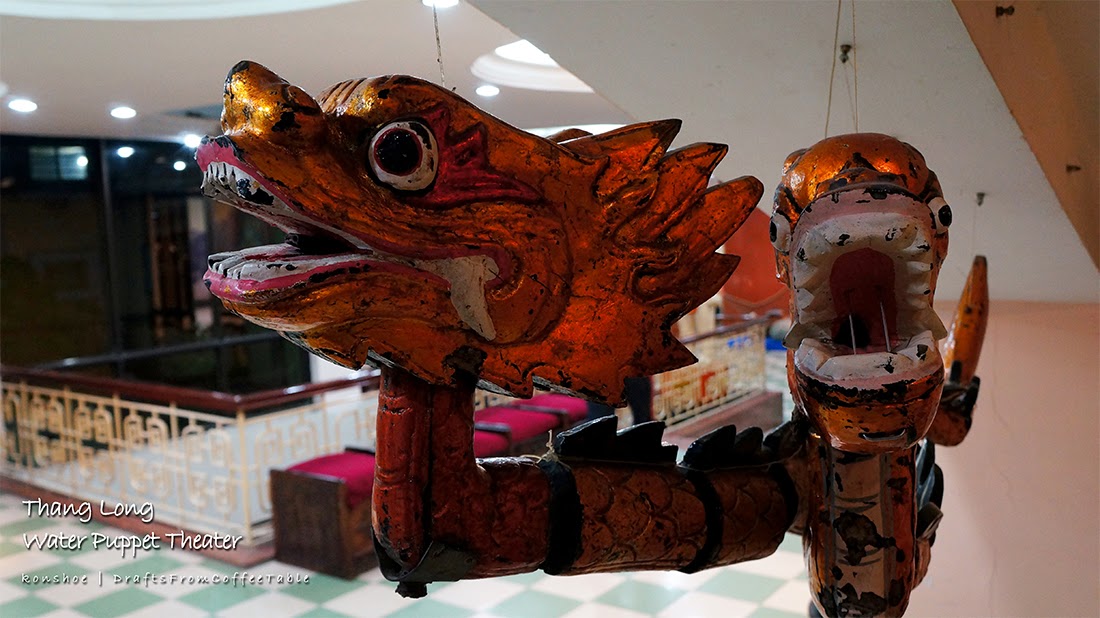 We always had the impression that the puppeteers were hidden underwater when they manipulated the puppets, but they were in fact hidden behind the straw curtain, controlling the puppets through horizontal bars extending underwater. The puppeteers had to stay immersed to the waist during the play for the whole day, which I could imagine not comfortable at all.

The puppet show ended with the puppeteers presenting themselves in person, and in the dimmed light, I almost mistaken them for life-sized puppets. Handcrafted puppets were on display throughout the lobby, and various items were on sale by the entrepreneurial operators, ranging from puppets to a recording of the show.

For me, I was indifferent to the play but I reminded myself that this is a cultural show, much as shadow puppets (wayang kulit) and Chinese opera are, both of which I did not know how to appreciate. Knowing that the puppeteers had endure being immersed to the waist taught me one thing - cultural shows usually originated from the purpose to entertain a mass that had worked hard, by using whatever material available in the immediate environment.

I caution visitors from comparing the show in Thang Long Water Puppet Theater against a cinematic encounter. Guidebooks may highlight this as a 'must-visit' but that is from a cultural point of view, assuming that the visitor is interested in getting in touch with the local culture as much as possible. If you do not fall into this category, you may as well skip this, or to at least be prepared so as not to be disappointed.

Environment:      Lakeside theater for a piece of Vietnamese history presented in Vietnamese cultural style
Suitable for:         To see one fo the cultural shows of Hanoi
Visit worthiness:   6.5/10 (visit if you want to see what water puppet is all about, but not to hold too high an expectation)