To me, the real treasures of Wong Tai Sin temple are what lies behind the temple cloister, an area which rarely gets the attention of most travel guides and websites. The temple cloister may lent a visitor his chance to pray to the deity, but it was the yard at the back which grant one a peaceful mind.


Circling around the rowdy human traffic, I reached an area that was relatively peaceful and devoid of any crowd except for a handful of like-minded visitors seeking for a peaceful mind. Surrounded by greenery and floras, I noticed the man-made structure for the first time, a straight and ornately carved wall spanning meters. 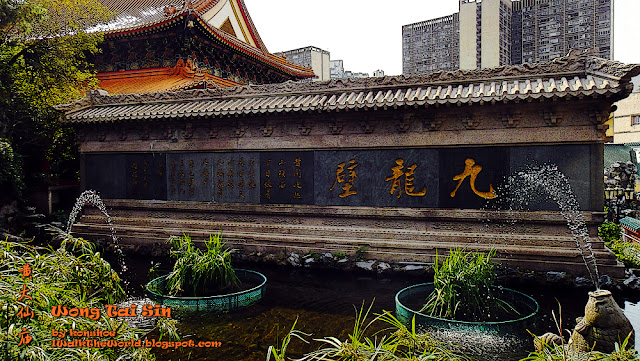 Inscribed onto the wall on one side was the three characters "九龍壁" (Cantonese: gao loong bek), which named this monument the Nine Dragons Wall, along with lines of poem. The other side of the wall was decorated with bas relief of nine identical dragons, lining the entire length.

The wall itself could have been unremarkable if not for the bas reliefs and the way it was ornately carved. Jets of water sprouted from the statues of koi in the midst of leaping in the air. All this made the area much more peaceful, more like a place for meditation and to ponder on matters of philosophical nature than the noisy cloister.

For East Asian cultures, koi is no mere animal bred for fun and as pets. These fishes have an important part to play in those cultures, believing that if any koi could swim to the dragon gate, and find the will and power to leap past it, they would be transformed into a dragon. This symbolized the ancients' belief that anyone with the will to succeed could become even the king or a deity, much as a koi could transform into a dragon.

Couple this belief with statues of koi in front of a wall named Nine Dragons Wall, one could hardly not see the reason behind this layout and design of the area.

The area surrounding the Nine Dragons Wall may be small, it nevertheless served as a prelude to the paradise lying beyond a cave-like entrance. In the area beyond, a breathtaking sight awaited me and I could hardly gasp after crossing the short distance separating both areas.