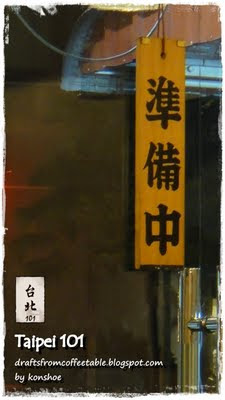 No, this is not about that tall building in Taiwan. This is about a shop situated right opposite of Queensbay Mall, with its yellow sign gleaming through day and night. Indeed, the same establishment was originally called Mommy Wang (王妈妈), and after they started operating for a while they switched to this name which you can see across the street from Queensbay Mall's entrance.

Most of the joints near or in Queensbay Mall are not exactly for one with is not on a splurge. If you are one of those with a limited budget, and still would like to get a decent meal that is different from your usual ones, then I would definitely suggest Taipei 101.

If you are having a stroll in Queensbay Mall, then it is not difficult for this shop to catch your sight. Look right out of the entrance (the ones near to shops) and look to the opposite shoplots. The glaring sign written in red and framed in yellow within a white background will beacon hungry diners to visit the joint.

Whenever I entered the shop, I felt like I was visiting Taiwan, that faraway place that is unfamiliar to me except in pictures and books. Framed photos of Taiwanese places lined the wall and offered a glimpse of the beauty that is Taiwan, placing the atmosphere of a foreign land on Malaysian soil.

Its name is Taipei 101, so what else do you expect apart from Taiwanese delights? Well, actually they do serve other varieties as well. Japanese and Chinese meals are also one of their selling points, and frankly I do love to try out each of everything from each of its pages.


You wouldn't be consuming Taiwanese food without getting their famous pearl milk tea (珍珠奶茶)! Taipei 101's ice blended drinks and cold drinks are a definite must for a hot and sunny afternoon to cool your heat down. I personally loved the Mint Pearl Milk Tea, especially the cooling minty sensation that gets through you from every sip.

There is one small thing that always catches my eyes. You may know of the idiom 'born with a silver spoon in the mouth'. Well, in Taipei 101, you get 'served with a (pair of) silver chopsticks on your bowl'.

There are a few dish within its claypot rice series which I find most satisfying. All of these meals are served with the chowder still bubbling from the hot pot. I loved the Seafood Claypot Rice, which despite its undistinguished English name, belies the deep flavor of this dish. This dish actually could be counted as a Chinese dish instead of Taiwanese, but who is counting anyway.

The large part of Taipei 101's menu is provided in Bento sets (弁当), those rectangular boxed sets which made its way from Japan to Taiwan and became popular in the latter. Unfortunately, I do not find these particularly helpful in my meals, since the rice just kept stuck at the corners where the spoon cannot reach. I guess it's fortunate that the Chinese invented chopsticks... ^^

A large Bento set sure is large, with soup, an iron braised egg and veges to complement the meal. On the other hand, if you are not a heavy eater like me, go for a small Bento set, which comes with less veges, replaced with spicy tofu. The latter set also come with braised pork rice (卤肉饭), instead of the plain rice sparkled with black sesame in a larger Bento set.


If you are just looking for a snack, you could always look to Taipei 101's side dishes. Despite its name, some of these dishes could be taken as snacks, which what most Taiwanese did, while some others could be ordered to complement whatever meal you planned for.

So the next time you are shopping in Queensbay Mall, and left with a limited budget for your dining, why not consider walking across the street and give this a try? At least you do not need to spend a few thousands to get an experience of having a decent Taiwanese meal.

View Taipei 101 in a larger map