Being from a different generation, choosing a dining place to celebrate my father's birthday has always been a tough choice for me. When he suggested Thai cuisine for his 58th birthday celebration, it got me thinking: where can I find a good Thai cuisine spot in Ipoh? Fortunately, he was the driver and he suggested Koh Samui, so there we went for his birthday celebration at the expense of my money... 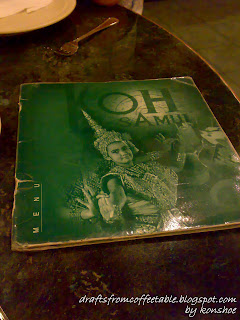 Koh Samui has 2 branches in Ipoh, and one of them is located right across Kinta City, otherwise known as Jusco to the locals. Ipoh may be known for its food, but famous Thai cuisine is rare here, with this restaurant being one of them. In case if you ever wonder what the name means, try browsing 'Koh Samui' in Google and it will return the name of an island off the east coast of Thailand, known as one of the tourist destinations in Thailand.

The restaurant greeted its visitors with an interior reminiscent of traditional Thai architecture. Wood was the main element here, with wooden chairs and wooden ceiling reinforcing this concept. Green was chosen as the main color, and it looked soothing under beams of yellow light shining from the ceiling, offering a feel that you are dining under the setting sun.

When we sat down, my mother had the honor of choosing from the menu, but she passed it to me after 3 minutes without a word. I took one look, and I immediately understood her response. While English explanation offered to stir up your appetitie, it did very little to help you choose when you look through a list of Thai food name pronounced in English.

Thai food, in my perception, relates strongly to seafood and soury taste. The main range in the menu was seafood, with fish, prawn and squid as its main choices; vegetables was offered, as well as a few egg dishes. Tom yam goong was of course among the first which we looked for; what joy would a Thai food had if there was not a bowl of tom yam to serve with. 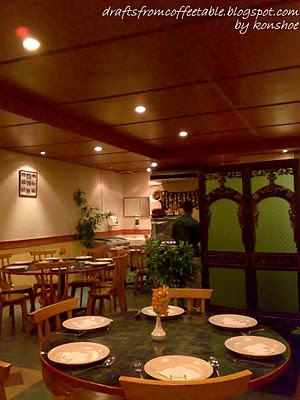 The interior of the restaurant was decorated with wood and green was employed to reinforce the wooden layout. Yellow light provided a soothing sensation.

Rice was served by the waiter, and they will refill your plate upon request. The first dish to be served was the omelette. I do not recall what the name was, but it does taste great. The steamed fish came next, with the watery sauce still bubbling from the heat provided by a candle below. Pla neung pri ma was the dish's name, and it was steamed with garlic and lemongrass. Unlike most Thai seafood dish, it was not sour and had a lighter taste, so this is definitely a recommended dish to people who do not enjoy a food with strong taste. 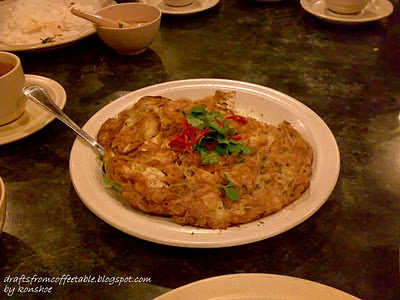 The omelette, served in Thai style. 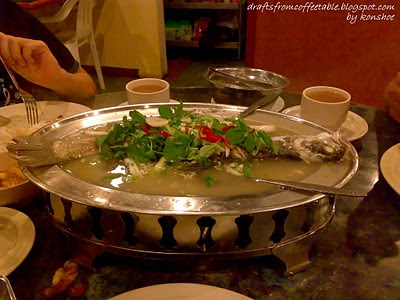 The menu called this pla neung pri ma, which is steamed fish with garlic and lemongrass, and assorted of herbs.

The deep fried squid was served last, and was very crunchy. It was served with dried bird's eye chili (cili padi to the local folks) but was not very spicy. In the end, my siblings were fighting for this as they loved crunchy food than anything else. This dish is recommended if you are bringing your kids, who may not enjoy soury spicy seafood as you may be. 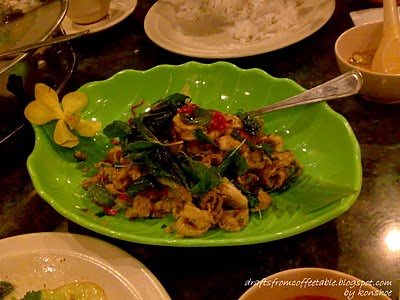 And where was the tom yam goong...? It was good, so good that we felt that it was not enough. The waiter recommended a small serving instead of the originally opted medium, and only when it was served that we found that it was just enough for 4 bowls. The soup was not as sour as most tom yam which I had tried, neither was it as spicy. In Thai, tom yam stands for 'sour and spicy', while goong is prawn in Thai. While the soup was not that sour and spicy, it felt more natural, without the feel of artificial flavoring. My parents were fans of Thai food and vouched for this from their experience.

Although I am not really a fan of Thai food, this is by far one of the few which I really appreciate. The place may not be a gathering point for friends of a younger age, but a family gathering will be nice, especially if you are celebrating a reunion or birthday celebration for parents.

Note: This piece is written based on experience from the branch in Bandar Baru Medan Ipoh, locally known as Kinta City or Jusco area. Experience may differ between this branch and that in the main branch.
By konshoe - December 01, 2010