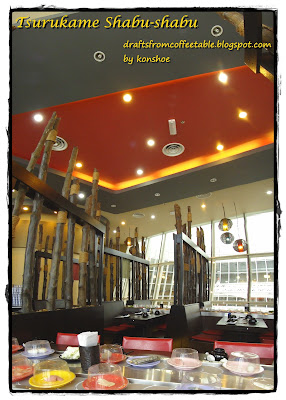 I noticed this shop located on the 3rd floor of Queensbay Mall but seldom pay any heed to it. I was slightly aware that this was a Japanese restaurant, but that was the extent of my knowledge of this place, until I paid it a visit during my girlfriend's birthday. We were thinking of trying something different for her birthday and Tsurukame came to my mind, since we never tried Japanese shabu-shabu before, and so there we went.

Tsurukame Shabu-shabu (鶴亀しゃぶしゃぶ) actually reminds me of Tsuruya Japanese Restaurant (鶴屋日本料理), another Japanese restaurant located in I-Avenue; I actually half expected the same thing when I entered. What Tsurukame offered was a buffet style shabu-shabu, not unlike the buffet style hot pot (火锅) in Chinese restaurants which bloomed recently.

To say that Tsurukame looks cavernous is an understatement; the high ceiling and wide berth provide a sense of grandiose, with tall wooden trunks serving as partitions between seats and decorating the place to look more Japanese. The shop looks into the mall on one side, and out towards the sea on the other side, with only glass panes separating guests from both worlds; these glass panes are the other reason why the shop looked large. This provides a sharp contrast between the tranquil shabu-shabu world within and the hustle and bustle world beyond the glass. As such, you can choose your place to look at the crowds below while savoring your meal, or to look out into the body of water beyond the mall to enjoy the seaview. Although the view is partially blocked by high-rise, the latter view still looks spectacular.

The novelty in the shop lies in its choice of broth - you get to choose 2 types of broth from a choice of 4 to start your own shabu-shabu: Chinese chicken stock, miso, kimchi and tom yam. All four types represent tastes from four different nations and cultures - Chinese, Japanese, Korean and Thai. I am not one for strong tastes, so I opted for Chinese chicken stock and miso broth, and the clear liquid did not let me down. The yellow-tinged chicken stock broth is crystal clear and serves well with most food, but with miso soup to provide an additional choice, the combination is perfect though slightly light in taste. Maybe I should have chosen one of the stronger taste broth to go with another lighter broth instead...

The other nice feature of Tsurukame lies in the way guests can serve the broth. It is usual that in Chinese restaurants, a hot pot of broth is placed over a gas stove, with the bubbling broth rolling within the pot. The smell of gas may be a little overwhelming at times, as well as the inability to control the temperature of the broth itself - I like my broth hot, but not scalding hot... Tsurukame serves its broth on induction ovens, with electronic controllers to control how hot you want the broth to be - change it to the hottest to watch your food boil in moments, or turn it down to let it simmer while you enjoy your food and take a sip from the pot. The low temperature setting is quite useful, since the pot is now located lower on the table, sitting near to it with steam rolling over towards your face is definitely not a comfortable moment. This is a novelty to both of us, since we never went to a shop which uses induction oven with controllable temperature to serve hot pot.


There are 2 ways in which one could get their food in Tsurukame - most of them are delivered through the conveyor belt rolling past your place silently, or you could take the rest of them from an area near the entrance of the restaurant. Obtaining food from the latter could be tiring for those sitting furthest from the entrance, which houses the beverages as well; but then again, the furthest spot from the entrance are seats blessed with the view of sea, so it may not be such a bad idea after all.

Tsurukame may have done well with the decoration and atmosphere, but could do better with the offered variety of food though. For a buffet restaurant, it is not on par with the choices available in most cheaper competitors, and for a Japanese restaurant, it sure is selling short on Japanese food. Most of the conveyed food are neither special nor appetizing, unless you feel excited by looking at a few stalks of veges or 2 pieces of mushroom taking up less space than half of the dish. Even the self-serving food near the entrance lacks variety and packs no 'oomph' factor, but at least it gets your tummy filled.

Even after some complaining, I do find some of the food quite interesting and though not exceptionally delicious, do prove to be something special. There was a type of fish placed within the self-serving area which looked skinny and unpromising on the outside, but once peeled apart reveals an interior filled with fish eggs. The food itself could not fill my tummy on any other day, but does prove to be a pleasant surprise. Another one which intrigued me was the yam pieces, for a lack of name to describe it. There were thin slices of purplish white, and tastes like yam after being cooked in the broth. Maybe I ought to take back my word about nothing special there...


Beverages are free flow, and so is the ice-cream. There are a variety of both to choose from, but the variety is limited as well. Although the food is nothing to scream over, it does prove to be satisfying to be seated facing the seaside view, watching the hustle and bustle of traffic in contrast to the calm sea beyond. It costed RM31.90 per person and with such less variety of food, I do think that it is not exactly very cost effective.

The Tsuru and the Kame


As a foodnote, the shop's name does have a meaning to it, although I never get to verify it with the owner. 鶴 (tsuru) is the kanji for stork while 亀 (kame) stands for tortoise; both of these animals represent longevity. I guess  the owner named the shop thus to wish tenants a long life through dining the shabu-shabu way.

Operating hours:  From when Queensbay Mall opened til when it closed
Parking:                 Since it is located within a shopping mall, parking may or may not be a problem depending on when you choose to visit. If it is a weekend, it will be wise to park around there before 2 p.m. If you choose not to park within the mall's parking lot, there are parking lots in front of shop houses, which you will still need to pay for the parking fees.
By konshoe - July 14, 2011